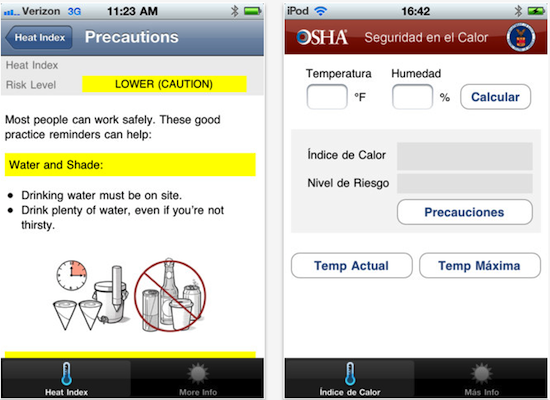 Rich Jones over at Gun.io recently came across the official Occupational Safety and Health Administration (OSHA) Heat Safety app on the Android marketplace. This all sounds rather hum-drum, and really, it is. The app is pretty dull, providing some heat safety tips, a heat index converter, and the ability to pull down information from NOAA’s weather database. Apparently, it doesn’t do all of those things, but that’s not too surprising — bad apps aren’t exactly news.

The real surprise came when Jones filed a Freedom of Information Act (FOIA) request through Muckrock.com, and discovered that the app — which is not exactly in working order — cost nearly $200,000 to develop.

In his FOIA request, Jones asked OSHA to identify the app’s creator, how much the agency spent on development, and a copy of the source code. The U.S. Department of Labor, which oversees OSHA, responded that the app was developed by a U.K.-owned company called Eastern Research Group Inc., but declined to provide the source code of the project as it could represent a trade secret. However, the agency was entirely forthcoming with how much the app cost.

Here’s the response from the U.S. Department of Labor:

The cost, including conceptualization, requirements analysis, content development, clearance, translation, programming and software design (including coordination with the National Oceanic and Atmospheric Administration (NOAA) to interface with their database), testing, accessibility enhancements (for accessibility-enabled smart phones), and documentation for the Android implementation of the application totals $106, 467. Estimates for the additional programming and testing necessary to ensure similar functionality and accessibility across the available iPhone and Blackberry platforms are $56,000 and $40,000 respectively.

It’s worth noting that, as of writing, the BlackBerry version of the app does not exist.

While we here at Geekosystem have not downloaded the app, the user reviews aren’t  exactly glowing. The iOS version apparently lacks the minimum number of reviews, but the Android Marketplace gives it a paltry 3.1 stars out of five. According to the Android site, the app has been downloaded some 5,000 to 10,000 times, which is quite respectable. However, many complain that the app does not work as advertised. Jones gave his impressions in his post, saying:

[…] I really cannot stress how bad this application is. Firstly, it isn’t actually capable of the function it is supposed to do. When I first tried the application, it told me that it was currently 140F in Boston. It is also extremely slow, it looks like butt, and it crashes all the time. It is completely horrible in every way. If I had to reproduce it, I’d say that it would take be about 6 hours at the maximum. At my hourly rate of $100, that’s $600.

This is more or less in line with what the harshest reviews have to say, though some people have praised the app and gave it full marks.

Now, while this looks very damning for OSHA, it’s important to note that in the world of government, apps and smartphones are still relatively new. Also, most agencies don’t have the in-house talent to create such apps, nor the knowledge to critically asses such an app, and rely heavily on outside contractors. It’s likely that OSHA knew they wanted an app, but had no idea how to go about building one or even describing what they wanted it to do. Throw in the bureaucratic red tape inherent in all government projects, and perhaps some over ambition on the part of the contracted developer (or any number of possible subcontracted developers), and you get a barely functional $200,000 app. That’s all speculation, of course.

In his write up, Jones points out that the U.S. Depart of Labor was extremely fast in responding to his FOIA request. One wonders if maybe someone in that office was looking to draw attention to this lousy app, perhaps aiming to prevent future waste. Although, that’s probably wishful thinking on my part.

Hopefully, OSHA has learned from their mistakes and will seek out smaller, more robust developers for their projects that can do a better job for far less. After all, only about a dozen people are credited as building Angry Birds, how many could you possibly need to develop a heat index app?