Americans Use More Than One Screen at a Time, Says Survey | The Mary Sue

Survey Says: American TV Watchers Can’t Handle Only One Screen at a Time 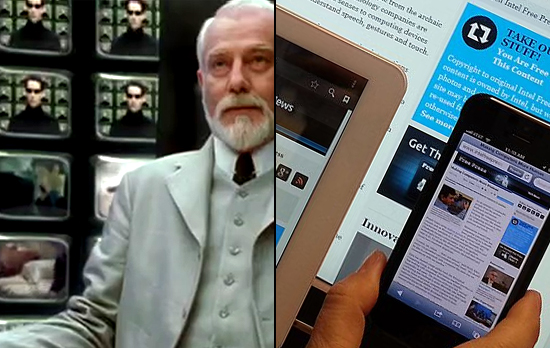 You might think you’re happy just watching TV, but if you’re American, you might also suddenly feel the need to figure out where else you’ve seen that actor — you know, What’s-His-Face — while you’re watching. Best to look him up on IMDb with your smartphone, maybe even see if Netflix has it. Also, you might want to check if anyone commented on your Facebook status before the show’s over. See, a new survey conducted by NPD says that TV-watching Americans are increasingly unsatisfied with just one screen at a time. 87% of viewers with a second-screen device will use it while watching the first one.

The NPD Group is saying that most of us, even while watching television, are splitting our attentions between screens in the form of laptops, phones, tablets, and whatever else might have a shiny display.

And here’s the amusing part: TV shows often direct their viewers to corresponding online content — games, contests, polls, Twitter — but for the most part, that’s not what people are doing. 29.8% of multitaskers are looking up actors in the show they’re watching, while 23.1% are just learning about the show itself.

You know, instead of just enjoying the show.

“Viewers are interested in searching to find further information about TV shows they are watching, but they are not using games and other immersive applications created as a component of the programming. This situation creates a potential diversion from advertising, and it will take a combined effort from content owners, advertisers, broadcasters, and others to present an aligned second-screen experience that will appeal to viewers.”

Personal computers are the most frequent simultaneously-used devices. Laptop users and consumers between the ages of 35 and 49 are also the most likely to shop for products while watching TV.

“Converting viewers into impulse shoppers has big potential impact for advertisers, who can leverage second screens to further connect with consumers watching TV.”

Sadly, there’s little talk about whether such scattered attention is even supposed to be a good thing. It seems to be a cultural trend driven by technology, which makes this something of a slippery slope.

Then again, there’s a lot of really craptastic TV shows worth looking away from.