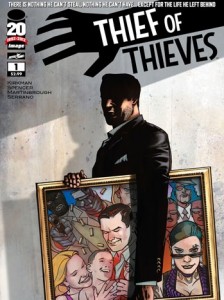 AMC likes Robert Kirkman! Right now, they like him! It has been announced that the cable network will develop Kirkman’s newest title, Thief of Thieves, as a new series. While this is obviously great news, it’s hardly a surprise that AMC would be eager to work with Kirkman on another project. Consider the monster ratings they’ve gotten from The Walking Dead. And now, they’re hoping that heists will start having a moment, similar to zombies, the ’60s, perhaps not dreary murders …

Thief of Thieves, which just began running this February, is focused on a man named Conrad Paulson. By day, he is a regular dude who lives a double life as a master thief named Redmond. In an apparent act of guilt, Paulson goes all Robin Hood-karma on everyone and will only steal what has already been stolen. Meanwhile, he is estranged from his grown son and ex-wife — all while trying to stay one step ahead of the FBI. Its third issue comes out today from Image Comics (The Hollywood Reporter has a preview).

AMC and Kirkman hope to do for thieves what they have already done for zombies — expose the humanity of the beasts. On The Walking Dead, we watched struggles like people being forced to mow down creatures that still vaguely resemble ourselves, and people like Hershel, who believed for so long that zombies were still just sick people, even after they’d taken nearly his whole family. Maybe because they’d taken nearly his whole family, and surely this could be fixed somehow. And now we have master thieves, people who break the law on a regular basis, hone their skills at doing something blatantly illegal, except that’s what they’re good at. That’s how they earn a living. And it tears Conrad Paulson’s family to shreds. And while he’s doing something that’s wrong, he’s still a guy with a broken heart. Kirkman says:

“Much like The Walking Dead brought horror to television in a unique and groundbreaking way, I feel Thief of Thieves can do the same thing for heist stories, showing the humanity of all the characters, including the criminals.”

He added, on AMC’s vote of faith in the stories that come from comics:

“AMC recognizes the limitless ideas generated by the comic industry. Their dedication to bringing The Walking Dead to life as a TV show has been key to its success and I’m excited about the potential of Thief of Thieves to reach similar levels of success.”

Thievery is no stranger to television; there are already a couple of moderately successful criminals-we-love on cable, like on TNT‘s Leverage and USA‘s White Collar. So, will Conrad Paulson become the Don Draper of stealing? Or the Rick Grimes? (Probably more like Draper. Yeah.)

Kirkman will reunite with producers David Alpert and Chic Eglee, with whom he worked on The Walking Dead. Eglee would become the showrunner if the show is picked up, and he already has experience on the subject of double lives — he previously worked on Showtime‘s Dexter, about a serial killer working for the police.

Now, let the casting speculation for the pilot begin!

(The Hollywood Reporter via Nerd Bastards)