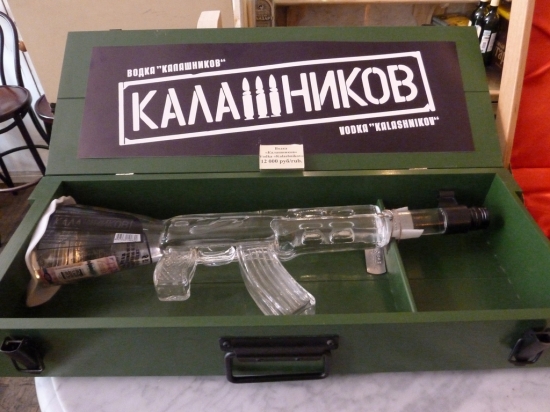 Two houses in Montville, Ohio came under gunfire on Wednesday, but the bullets didn’t come from gang members, terrorists, or insurgents — it came from two guys drinking beer and firing an AK-47 and several handguns at a target, though clearly not very well. Luckily, no one was hurt, and the two men were arrested before any serious damage could be done.

If you need a refresher on the AK-47, here’s Nicolas Cage’s speech about it from the movie Lord of War:

Mark Bornino and R. Daniel Volpone were arrested after several 911 calls reported the gunfire. Mary Kurec, one of the 911 callers, was told by an operator to stay in her basement to avoid being shot. Bullets entered her home, and one even ended up in her microwave, which was mounted at head-level.

Montville has no law saying citizens can’t fire their guns at targets within the town, so the act of firing the gun wasn’t illegal, but they were drinking beer, and the target was obviously not stopping the bullets so the two men will face charges for failing to operate a gun safely, and drinking alcohol while handling a weapon.

Police estimate that the two men fired 90 rounds from a field about 500 yards away from the homes before being stopped, and believe they simply didn’t realize they were firing bullets into a populated area. When police investigated they saw that the men were firing at a target without a proper backstop. The AK-47 and 628 rounds were taken from the scene along with a 9mm with 50 rounds, a 380 handgun with 8 rounds, and one revolver with 40 rounds.

It’s incredibly fortunate that nobody was hurt, but it’s obvious that someone could have been.

(via WKYV, image via Ian Nicholson)