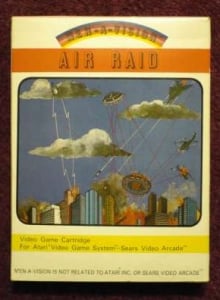 Vintage video games can fetch high prices if they just so happen to be of a certain kind. Sometimes a sale is made based on what comes with the game rather than the game itself. In 2010, a copy of the Atari 2600 game Air Raid sold for $31,600, because it was the only known copy with a box. Now a new copy of Air Raid has surfaced with both the box and instruction manual, making it the only known complete copy in existence, and has already hit $11,650 on its auction.

Well, just last week a second boxed and complete Air Raid was discovered by a family here in Southern California. It turns out after they just recently discovered the story of the first boxed Air Raid sale, which is still making the rounds on the internet, their father recalled he had been given that game by a sales rep for the company Men-A-Vision while he tended a game retail space in a local drug store. After this store closed he was given the video game stock and even the Atari display kiosk, seen here, which all these games have been stored in for around thirty years. It wasn’t until they read of the outrageous selling price of the first one did they even think of these games stored in their past.

Obviously, any rare find like this is worth some amount of skepticism, but it’s supposedly the real deal. If you’ve got a hankering to own the only known complete copy of Air Raid, and a lot of money to spare, this is a chance to own a one of a kind piece of video game memorabilia.