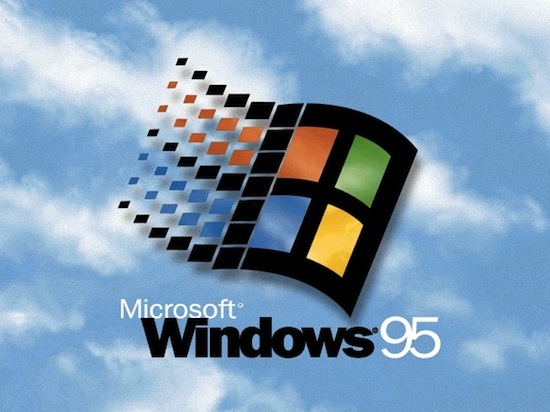 Microsoft had big plans for the follow-up to their incredibly successful Windows 3.1 operating system Windows 95. There would be much that separated this OS from its predecessor, namely the adoption of a desktop-based graphical user interface, that would move Windows toward what those of us pampered to live in this hyperion age as a modern operating system. To go along with this bold move, Microsoft wanted to capture their user’s attention with a startup chime that would herald this new experience.

To that end, they approached composer Brian Eno to come up with a tiny tune that would play each time the system started up. Eno was the right man for the job, having begun experimenting in ambient and electronic music over a decade previously, releasing such musical touchstones as Music for Airports. In contrast to the sprawling space albums allowed him, Microsoft challenged Eno to fit an entire musical experience into just 3.25 seconds. Eno has been quoted as saying that at the time he was “bereft of ideas” for his own work, and leapt at the opportunity for musical problem-solving. Eno says:

I thought this was so funny and an amazing thought to actually try to make a little piece of music. It’s like making a tiny little jewel.

In fact, I made 84 pieces. I got completely into this world of tiny, tiny little pieces of music. I was so sensitive to microseconds at the end of this that it really broke a logjam in my own work. Then when I’d finished that and I went back to working with pieces that were like three minutes long, it seemed like oceans of time.

With that incredible story, this humble little piece certainly takes on new meaning. On a close listening, there are layers of depth to it, and a surprising, longing pulse at the end of the piece. Take another listen, see what you think.

Just like computer operating systems, video game consoles need a quick, instantly identifiable startup sound bite. One could easily argue that the gaming console needs that instantly recognizable startup sound more than a computer, because a video game console is, for the most part, a dedicated unit with the sole purpose of delivering entertainment, whereas a computer is used for a variety of reasons, some of which aren’t particularly fun. Because of their dedication to entertainment value, video game consoles can employ the power of Pavlovian conditioning to great positive effect: Hear the chime, and a fun game is about to happen. Just about every video game console to have a splash screen has employed a startup chime, but few — if any — are more instantly recognizable than Sony’s startup chimes for each of their PlayStation consoles, nor any more symbolic of the gaming industry during the console’s time period.

The original PlayStation’s chime tells the tale of a burgeoning gaming industry, adopting a tone that is aiming to be futuristic, though in practice is somewhat low quality, which is exactly what was happening with the industry during the PlayStation’s time. Video games were breaking out, seeing the release of first installments in venerable franchies that are still wildly popular today, employing boxy graphics and clunky controls that seem awful now, but at the time were seen as revolutionary. The PlayStation 2’s startup noise is much cleaner than the original PlayStation’s chime, and is much more aggressive, as anyone who had the television accidentally turned up to a high volume as they turned their PS2 on will remember. The aggressive tone perfectly symbolizes the PS2’s era — an era that many would come to feel was the golden age of gaming, being bombarded by fantastic games on a relatively nonstop basis for around four years straight, spread across the PS2, Xbox and GameCube. Finally, the PlayStation 3’s startup chime tones down the aggression, opting for a classy — some would say pretentious — dulcet tone. The tone signifies the gaming industry’s growth into maturity — not necessarily maturity in the content of games, but the maturity in the understanding of the medium and its delivery methods, as well as the growth into gaming consoles becoming more of an entertainment hub rather than simply a dedicated games machine.

The PlayStations’ startup noises aren’t the only gaming machines with chimes that hold insight into their era, but they’re certainly a great representation of exactly how much a quick sound bite can matter.

Created for the “Intel Inside” program, which was created by Dennis Carter, the Intel jingle is one of the most conservative-but-effective jingles in computer industry. A mere five notes, three of which are the same (D♭ D♭ G♭ D♭ A♭), the tune is familiar to almost everyone everywhere and manages to evoke “computer” in a way that is uncanny. Although some of that might have to do with our own personal connections to it, the jingle was supposed to sound computery. When Walter Werzowa was commissioned to create the jingle, he was told that it needed to be about 3 seconds long and use “tones that evoked innovation, trouble-shooting skills and the inside of a computer, while also sounding corporate and inviting.” A tall order for 3 seconds. It took Werzowa 10 days to come up with and record the 5 note jingle. He used a bunch of marimba and xylophone because he thought they sounded corporate. Pretty weird when you think about it.

In 1991, Apple’s resident musician Jim Reekes had a problem. He painstakingly worked to create the iconic startup chime that’s still with the OS today, but a whole new suite of sounds needed to be developed for System 7. Unfortunately, part of the settlement between Apple Computers and Apple Records, the label of the Beatles, was that Apple computers could never foray into music in any way. When reviewing Reekes’ sounds, Apple’s lawyers objected to a noise he called “chime.” They said the name was too musical, and would need to be renamed before they would consider it for final release.

Reekes cheekily responded that “let it beep” would be appropriate, which appalled the lawyers. Reekes responded that Apple Records could bring litigation if they wanted, saying “so sue me!” In a flash of insight, he realized that this would be the new name for the sound. Giving it a homonym spelling “sosumi” and claiming it was Japanese, the lawyers acquiesced and the subversive sound was entered into the operating system. Twenty years later, it can still be found amongst the alert noises.

You can see Reekes recount the whole story in this video interview on the Dutch program One More Thing.

The iconic, oft-parodied, harbinger of the email age, the “You’ve Got Mail” sound bite from AOL, is perhaps one of the most important clips in the history of the Internet. Recorded by voice actor Elwood Edwards way back in 1989, the clip managed to help new Internet users get accustomed to the bizarre nature of the World Wide Web. “You’ve Got Mail” was comfortingly familiar to a lot of users who were still grappling with what “electronic mail” was and how it worked. While you won’t hear it often any more, it definitely carved out its place in Internet sound history and is arguable right up there with the anguished screams of a 56k modem.

One may feel a sound bite is just that, a quick piece of noise, but the above list should prove that a lot of meaning can be held within, and conveyed by, a short piece of well-composed sound. From insights into a certain time period, to creating a Pavlovian effect of instant joy or anticipation, recognizable pieces of noise are more important than the short amount of time it takes to listen to them would make them seem, and the tech industry understands that as much as — if not better than — anyone else.

This post is courtesy of our partnership with Intel, a company with one of the most instantly recognizable sound bites in technology, which happened to tug on Geekosystem’s nostalgia strings along with the rest of the above sound bites, and produced an effect most Pavlovian.