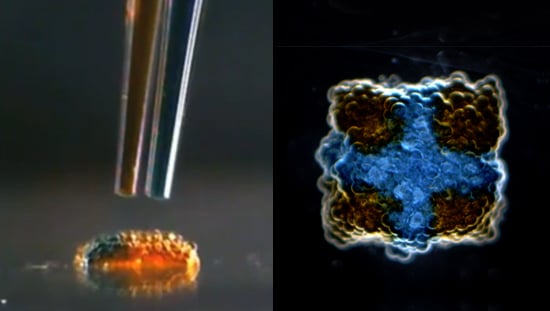 As 3D printing becomes more popular, accessible, and advanced, researchers and hobbyists alike are using the technology to produce more and more sophisticated items. Crossbows. Animal skeletons. Pretty much anything that fits in an 8-by-8-by-8 inch box. Some of the medical grade work being done on 3D printing, though, makes all of that awesome stuff look like child’s play. In the latest example of that sort of work: Scientists at the University of Oxford have created a 3D printer capable of building synthetic shapes that imitate living tissue.

Usually, 3D printers make objects by thinly layering plastics or metals. Instead, the printer used in this work uses two nozzles that spit out tiny fluid droplets into oil. When the droplets settle, they gather fatty molecules from the surrounding oil, forming a membrane-like layer around the droplet. The layers of neighboring droplets then fuse together with the first layer, forming a two-layer membrane — not unlike the lipid casing of our own living cells. 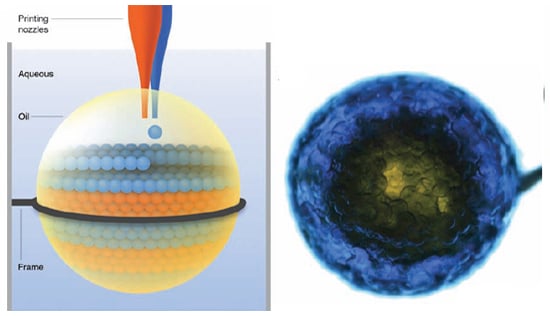 Presumably, this could also be used to 3D print synthetic corn-on-the-cob.

Of course, this all happens very precisely and very swiftly, printing out shapes made up of tens of thousands of these tiny globules in short order.

Aside from being soft and squishy little pieces of tissue with a fat- or brain-like texture, the Oxford team demonstrated that the prints could carry an electric current, just like living tissue. When Gabriel Villar, a doctoral student in Oxford’s Department of Chemistry, channeled Dr. Frankenstein by placing electrodes at either end of a channel of membrane proteins, ions flowed through them and it registered the current. Just like a neuron, one end of the tissue could receive information through a fixed path from the other end.

By adding salinity into some of the samples, researchers were also able to get the shapes to fold and contract like muscles. Villar even prompted a four-petaled flower shape to curl up into a hollow sphere. It’s kind of beautiful, so we recommend you watch it.

This is, of course, all very early work, but synthetic substances with the properties of living tissue could have a wide range of applications in medical science from providing new methods of drug delivery to repairing or even replacing damaged human tissue. Professor Hagan Bayley, who led the study now published this week in the journal Science, said:

“We don’t know if, in the long term, those cells would proliferate in the body and cause problems. We’re making very simple materials that can mimic tissues but don’t use living cells.”