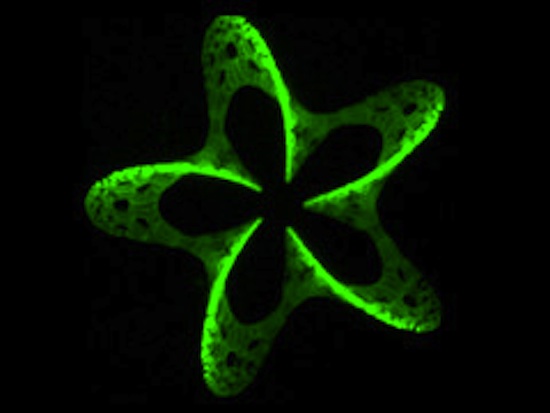 3D printing is getting easier, more cost effective, and more household friendly every year. Some of its most impressive applications, though — like its potential in the world of medicine — won’t be making their home debuts anytime soon. This is because while printing, say, a Mario statue in your Makerbot is very simple, printing things on a nanometer scale is still very hard. Doable, but very, very hard. Researchers at the Vienna University of Technology have made a step toward simplifying that task, though, using a laser beam to place single molecules on structures just a few nanometers wide.

The Vienna team  has created nanometer sized replicas before, ranging from the world’s tiniest toy race car to a vanishingly tiny replica of London’s famed Tower Bridge. Those were made from uniform materials, essentially amounting to neat tricks, but little else. 3D printing material on a nanoscale using different types of materials opens the door to entirely new varieties of material with medical applications — from microsensors that act as miniature “labs on a chip” to the printing of artificial tissue, but it’s been difficult to accomplish until now.

To improve their precision, VU researchers took a lesson that will be familiar to FPS fans. They added a laser sight developing an entirely new technique known as “3-D photografting.” Using a beam of laser light like a paintbrush, they are able to introduce weak points into 3D printed nanomaterials. These weak points are eager to bond with chemicals the team introduces to the material, meaning that they can place those chemical molecules with unheard of precision. By placing those molecules carefully and herding them into place, researchers hope to be able to 3D print materials like capillaries and blood vessels in the future.

(via ScienceDaily, image via Vienna University of Technology)