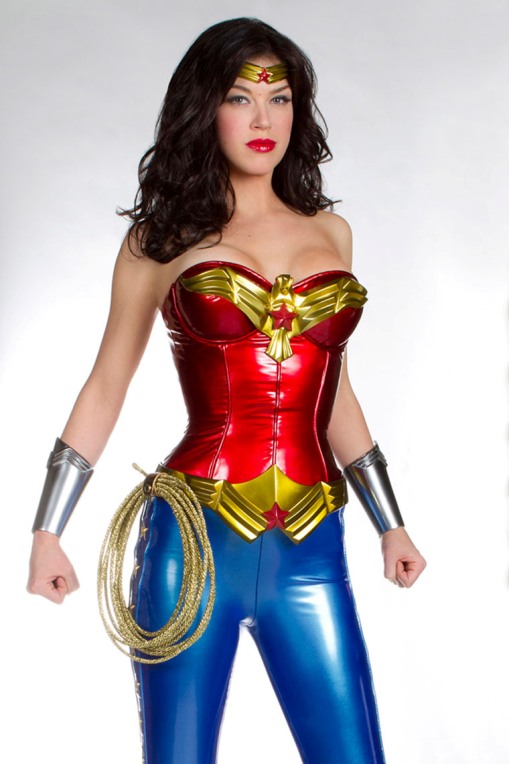 Although I’d be perfectly happy with a 24-hour live broadcast of director Patty Jenkins and Gal Gadot’s interpretation of Wonder Woman, I have to say I’m pretty glad these projects never saw the light of day. They might’ve cursed Diana into the realms of mediocrity and not let the wondrous vision we saw this summer take shape.

Over at The Hollywood Reporter, Tatiana Siegel examined a slew of Wonder Woman big ideas that fizzled on the production back burner for years before being mercifully put out. Wonder Woman was a coveted property, with names like “Sandra Bullock, Catherine Zeta-Jones, Megan Fox, Christina Hendricks, Beyonce Knowles” all rumored at various points to be donning the tiara, but no one seemed to know quite what to do with the Amazon princess. I am so very glad these projects never came to fruition:

Whedon, who was reportedly paid millions of dollars for the script we would rather not talk about after this mention, apparently envisioned Diana as an “anti-corporation” fighter. Per the Hollywood Reporter, he described the story as “about how giant conglomerates are eating the world and how we are all puppets underneath them — maybe that’s what [Warner Bros.] didn’t like about it.” Or maybe they hated how everything was told from Steve Trevor’s perspective, Diana’s sexy dance for the villain, and the strange fixation on Diana’s bare feet. IDK.

In the original Justice League movie pitched in 2007, Diana was set to fight a hypnotized Superman as they both flew through the air:

After he lands a shattering blow, sending Wonder Woman jackknifing into outer space, the Man of Steel delivers his parting words, “Die … bitch …!”

For the rest of my life I will wake up grateful every day that this scene does not exist anywhere on film.

The law-minded creator of TV shows like The Practice, Ally McBeal, and Boston Legal wrote an unaired NBC pilot for a Wonder Woman series in 2011. Starring Adrianne Palicki, the show envisioned a modern-day “Diana Themyscira” who “not only fought crime in contemporary Los Angeles but also was CEO of her own large corporation.” What if Joss Whedon’s anti-corporate Diana had met David E. Kelley’s corporation-running Diana?? Die, bitch!

Siegel writes that Kelley’s Wonder Woman pilot featured a cameo by law professor Alan Dershowitz, who has of late been distinguishing himself on TV by strenuously defending the Trump administration. In the cameo, Dershowitz would have been seen “arguing against Wonder Woman’s extrajudicial reach,” saying, “I don’t remember anything in the United States Constitution that says a woman in a costume is exempt from the Bill of Rights.” This is a thing that rightfully no one ever needed to see.

I don’t know about you, but I’m feeling triply blessed that our first blockbuster incarnation of Wonder Woman was Patty Jenkin’s. Gal Gadot made for such a perfect Diana Prince that it’s hard to envision anyone else in the role. And the resulting movie wonderfully wove together the fantastic Amazons, Diana’s maturing emotional arc, supportive sidekick Steve Trevor, unbelievably kickass fight scenes, warm humor, feminist themes, and an evocative World War I backdrop. Hopefully the film’s immense successful will put the kibosh on anyone penning dialogue like “Die, bitch!” ever again.