One of the great pop culture white whales of recent years has been Joss Whedon’s mysterious Wonder Woman script. As audiences begged for the iconic superheroine to hit the big screen, and Whedon’s take was rejected, that rejected script became a symbol of Everything That’s Wrong with Hollywood. It became a symbol of an All Boys’ Club trying to keep superhero movies For Men Only. Turns out? That script was just bad. And also hella sexist.

You can totally read the script online (I mean, you shouldn’t, but you can), and after having originally leaked last month only to resurface last night, there are plenty of people out there doing a great job of pointing out just how badly written and cluelessly sexist the script is:

Having read through as much of the script as I could stomach, there were a couple of things that stood out to me personally:

The script opens with Steve Trevor and follows him to finding Diana, basically making the entire movie about him. Uh….

And when he DOES meet Diana, he’s not even meeting a person, but something “elemental:” Diana is introduced as “THE GIRL” in her own story. As you continue to read, she’s continually the object being looked at, corrected, or talked about. She’s generally reactive, and rather than making heroic decisions is usually told what she should be doing in any given situation. Steve Trevor, rather than inspiring her as he does in the current Wonder Woman film, serves as her actual creator in this script. It’s really, really gross. Jump to the last scene, and they “end up together.” Ugh.

What decisions does she make? Oh, things like doing a seductive dance to distract the bad guys. Double ugh.

Diana isn’t the only woman who is the victim of sexism in this script.

But Wonder Woman needs to experience sexism so she can fight it, right? It’s one thing to have a pointed instance of a character experience sexism in a script at the hands of another character as a plot point. It’s another when the very writing and presentation of the script is sexist. That writing permeates the entire thing. The script is given to every department and everyone working on the film. That means everyone on the project is absorbing these seemingly innocuous word choices that are harmful precisely because they’re insidious. For example: 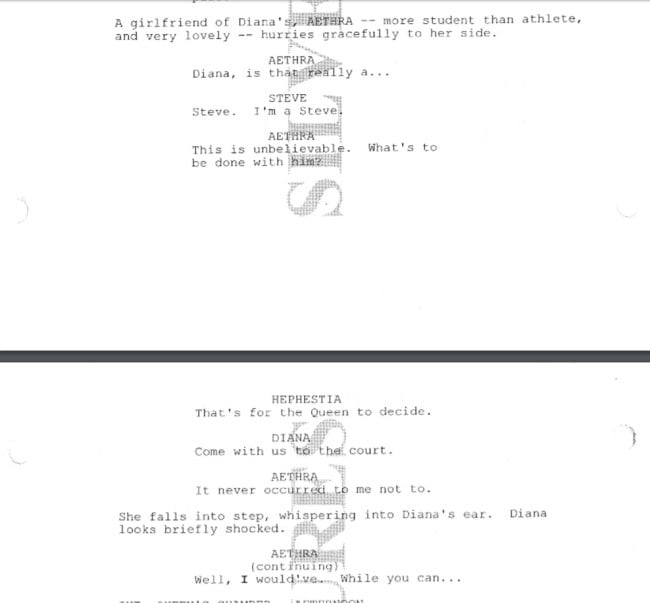 I mean, God Forbid Diana have a friend who’s not “lovely,” am I right? Love how that had to get tacked on. “More student than athlete” wasn’t enough. As if to say, Look guys, she’s bookish, but that doesn’t mean she’s not hot. As if to remind us that she wouldn’t stray too far from the standard Whedon stable of waifish, bookish girls who also happen to look like models.

The fascination with what penises look like in an all-female society when dealing with an intruder is especially “charming.” I promise you, cis male screenwriters, left to their own devices, women are not nearly as preoccupied with what your penises look like as you are.

Oh, and then there’s the assurance that, not only can bookish girls be hot, but so can middle-aged women! I know, right?

Well, WHEW! Good to know that middle-aged women can still be beautiful and not be falling apart!

Writers need to recognize that, just because you don’t see things like descriptions and directions on screen, that doesn’t mean the words aren’t affecting the entire production. When you hand a script like this to a team, you’re basically saying This is the vibe of the piece. They’re going to take that vibe and imbue it into every aspect of the film. You’ve ruined it before you’ve even shot anything, unless you have a really strong director. Thing is, Whedon was also set to direct this after having written this script. Now, he is a strong director … but he would’ve been strongly reinforcing what he’d already put on the page.

Kinda makes you worry a little about Batgirl. I mean, this Wonder Woman script is eleven years old, so Whedon’s probably made some progress since then. I’m still excited for Batgirl, but now I’m just a little wary.

Thankfully, we never had to sit through this movie, and we instead got an amazing one.  To be honest, I haven’t seen the current Wonder Woman screenplay. I have no idea if its refreshing take on Diana, on women generally, and on female superheroes specifically are a testament to Patty Jenkins’ direction, Allan Heinberg’s screenplay, or both. Likely, both.

Now, I do want to say one thing about this script leaking in the first place. There’s a reason this didn’t get made. So, what purpose does leaking it serve? People on the internet tend to be so interested in “calling things out” that they dredge up stuff that was never meant to see the light of day in the first place. But Teresa, isn’t that what you’re doing right now?

Listen, I didn’t leak it. I’m just reporting on the leakage.

I’ve heard J.J. Abrams talk about his ill-fated Superman script, an early draft of which was leaked and was subsequently never made. That’s a slightly different situation, but he talked about how people, in the interest of spoilers and “wanting to know” leaked something that was a draft. it wasn’t ready yet, but was put online to be judged, and thanks to the negative reaction about something that wasn’t even finished, the studio panicked and never made it.

As a writer, I totally get being pissed off about a leak, and as a consumer of content, when I see stuff like this, I try to remember that there are many, many steps between script and finished product, and many opportunities for improvement, growth, and change. I mean, thank Hera this never got made! But also … this script may have evolved into something better. We’ll never know now.

I guess the only purpose this serves at this point is to ensure that one of our favorite creators knows that we want and expect better. That we’re not interested in him resting on his laurels and counting on past adulation over his feminism to see him through today. Feminism isn’t something one does once and never thinks about again. It’s an ongoing process. I’d like to think that Whedon is continuing to evolve.