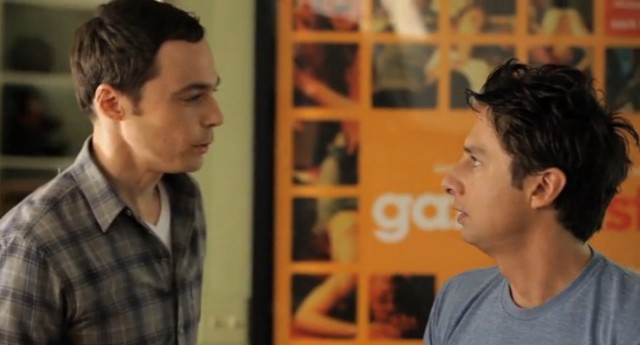 Zach Braff’s first film, Garden State, has passionate fans, and they’ve all been wondering what’s kept Braff from doing another film. The one-word answer is “Financing.” Movies are expensive to make, but after the success of the Veronica Mars Kickstarter campaign, Braff decided to turn to the crowdfunding site to pay for his next film Wish I Was Here with a little help from his friends.

When it comes to Kickstarter, a compelling video can be just as important as a good idea. If you’re a fan of Garden State then maybe all you need to get excited enough to back the project is Braff talking into a camera. In case you need further convincing, Braff enlisted the help of friends Jim Parsons, Donald Faison, and Chris Hardwick. Still not convinced? Parsons has a grappling hook. Does that do anything for you?

As outlined in the video and on the Kickstarter page, Wish I Was Here isn’t a sequel to Garden State, but it will carry on in the same quirk-filled melancholy tone and will also probably have a pretty great soundtrack. The problem with financing isn’t that Braff couldn’t get it. It’s that, as explained in the video, people who finance films expect a certain level of control over their investment. If he can fund Wish I Was Here through Kickstarter, Braff won’t have to make any compromises to pay for the project.

This could be exactly the sort of skirting-the-system approach to filmmaking everyone started talking about after the Veronica Mars campaign. Like Veronica Mars, Braff is seeking a goal of two million dollars, and with 30 days left to go he’s already got $304,056 at the time of this writing — up at least $50,000 from when I began this post.

You know what? The total just went up $10. I’d like to see this happen.