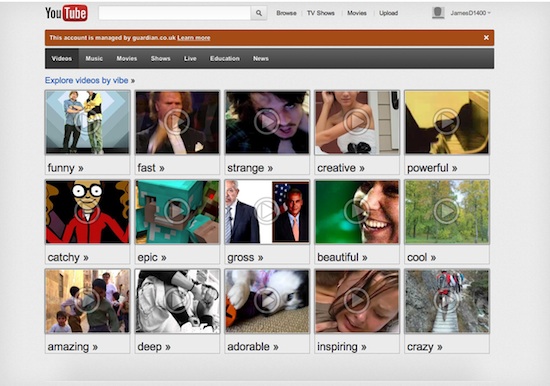 Have you ever watched a video on YouTube, then watched a related video, and then another related to that video, and kept tumbling down the rabbit hole until someone finds you passed out at your computer? Well, whether you admit it or not, YouTube knows you have. They know and they’re figuring out how help you find even better videos when you’re just clip-surfing, instead of looking for something specific. According to multiple users, including The Guardian’s James Dart, YouTube is test-driving a new search tool called the Moodwall that lets users find videos by vibe.

The Moodwall recommends videos based on descriptive terms like “funny,” “inspiring,” and “catchy,” offering yet another way to waste time scanning the Internet. Those are the actual terms, by the way. At least with Moodwall, we’re scanning the Internet more effectively. Well, maybe not too effectively; users on Google’s support forums have been complaining about varying jankiness with the mysterious new service.

Google has not officially acknowledged the existence of the Moodwall; it’s supposedly being secretly tested on the public, which makes no sense and yet somehow totally works. Since they haven’t acknowledged that the Moodwall exists, they have not revealed how many users have access to it now or if there’s a roll out timetable for the greater YouTubing public.

(via The Verge, image credit via James Dart)