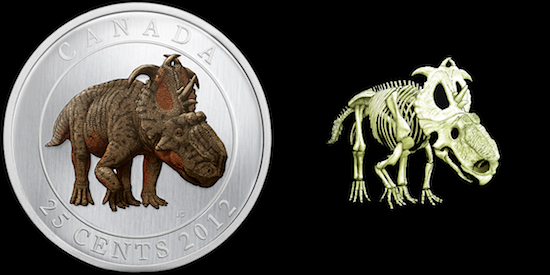 If you’re a collector of coins, all things Canadian, or dinosaur paraphernalia, has the Canadian mint got something for you. Presenting: A Canadian quarter showcasing a dinosaur that, when the lights turn down, glows in the dark as its own skeleton. As a bonus, considering it is printed by the Canadian mint, it should be accepted as legal tender.

Unfortunately, if you want to start paying for things exclusively in glow-in-the-dark Canadian dinosaur quarters, you’ll be losing a significant amount of money on the endeavor, as each dino-quarter will set you back $29.95. Don’t worry, Canada didn’t just suddenly turn into a nation of paleontologists and vote to add dinosaur-related imagery to all of its currency, they’re simply honoring a dinosaur whose remains were discovered in Alberta back in 1974, the Pachyrhinosaurus lakustai.

The species of Pachyrhinosaurus honored in the coin was named after its discoverer, Al Lakusta, who found the bone fragments while hiking around Pipestone Creek. He wasn’t aware of the coin until a local post office employee told his wife about it after reading about it in a brochure.

This coin won’t be the last of Canadian coins sporting dinosaur imagery, as this glow-in-the-dark quarter is part of a series dubbed Prehistoric Creatures, that will see the release of three more coins. The quarter will be released by the Canadian mint on April 16, less than one week away.

(The Vancouver Sun via Geekologie)