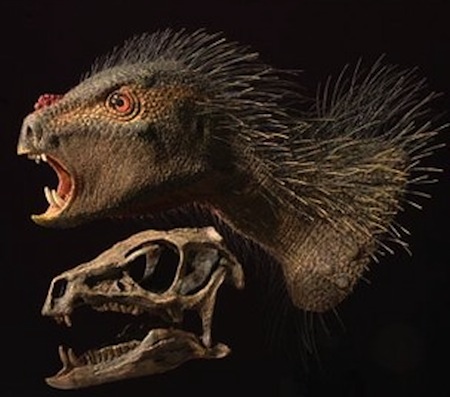 A new report out of the University of Chicago provides the first insight on a new species of Dinosaur that sounds like the coolest, most terrifying creature to ever roam the face of this planet. The Pegomastax africanus was about the size of your average house cat, was covered in pointy spines, and had a pair of Dracula-esque giant canine teeth. I like to call to call it “Vampire-Dwarfosaurus”.

According to the first analysis from University of Chicago professor Paul Sereno, the Pegomastax africanus, which literally translates to “giant jaw from Africa”, stood less than a foot tall, and was covered in porcupine-like needles. Despite having two huge canines, the species was likely a herbivore: That said, as a Heterodontosaur, a.k.a. a Dinosaur with two giant vampire teeth, it’s very possible that the species also ate small animals and/or large bugs.

Though just declared a new species, Vampire-Dwarfosaurus, was actually discovered on a dig in South Africa all the way back in 1983. University of Chicago professor Paul Sereno claims that he saw the remains for the first time in a lab at Harvard while working on his graduate degree. According to Sereno, he had planned to analyze and report his finding right then and there, but was distracted by bigger, more ambitious research projects…

Hold on. What could be bigger than discovering a dinosaur? I’m pretty sure that’s coolest thing a paleontologist can do without riding a velociraptor.

Almost thirty years later, Sereno came to his senses and published his findings on the species. Unfortunately, that means I’m going to start going to start dreaming about getting chased and eaten by pygmy vampire dinosaurs.