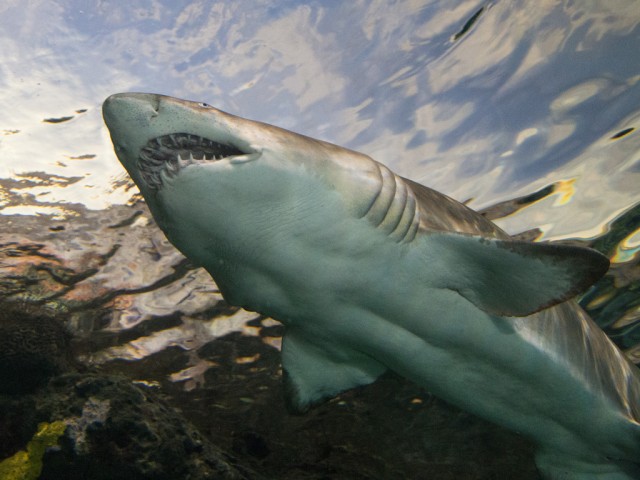 We thought it wasn’t going to get any weirder after “giant Xbox full of zombies” thing that Microsoft pulled two weeks ago. Apparently we were wrong. In anticipation for the gaming console’s release across 10,000 countries, they stuck one of the Xbox Ones in a tank and are guarding it with sharks. No, really. Big ones.

According to a New Zealand News website that’s aptly named Stuff.co.nz, the Xbox One that’s currently being submerged underwater in the Auckland Museum (in an airtight container, of course) was intended to be the very first of the new consoles to be sold on the market — thus the incredibly ridiculous amount of flashy, shark-toothed security.

Naturally that plan backfired, because this is Microsoft we’re talking about, and Target accidentally sent Xboxes to a whole bunch of pre-order customers two weeks in advance. So if you’re planning to steal an Xbox One before it gets released and you’re not Carmen San Diego, you should probably just go ahead and nab one of those consoles, and not the one that’s currently being protected by 20 some-odd sand tiger sharks.

Microsoft is still going ahead with their idea for an elaborate launch party, where they will supposedly fish out the console next week and hand it to one “lucky” customer. We put “lucky” in quotation marks there because come on. You know something’s going to go wrong and one of those sharks is going to bite a corner of the airtight case off, or something. They’re sand tiger sharks, after all. Sure, they don’t tend to attack humans very often, but they can also grow up to 10 feet long and can take down a 700 lb fur seals like it ain’t no thing. You can’t tell us that a little bit of glass is going to stop this shoal from playing video games if they want to.

That’s the official term for a group of sand tiger sharks, by the way. We prefer the generic “shiver” of sharks, but “shoal” or “school” works, too. After all, it doesn’t really matter what you call a big bunch of sharks if you’re standing between them and their Xbox.

(via The Verge, image via Kevin McGee)