Microsoft’s Giant Xbox One Was Full of Zombies, We Are Now Scared of Xbox One

Does that mean the regular size Xbox One is full of tiny zombies? 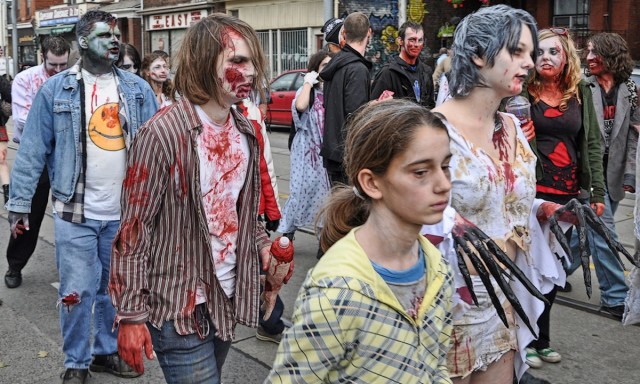 It looks like we were right about the impending doom inside of Microsoft’s giant Xbox One, which is strange, because we weren’t at all serious. It opened yesterday and unleashed a horde of zombies on Vancouver, and a bloodbath—no, wait, they were actors playing zombies, and no one got hurt. Put down the shotguns and implements of decapitation.

The marketing stunt was meant to draw attention to Xbox One exclusive Dead Rising 3, which will launch on November 22nd alongside the Xbox One. So, now we know Microsoft has a secret weapon against the PlayStation 4: zombies. Luckily, some intrepid people got the end of civilization recorded for your enjoyment.

OK, sure, there were also Xbox One demo units inside if you escaped certain doom, but who can think about that during the zombie apocalypse? So, we were a little off in asserting that the Xbox One might transform into Megatron, but zombie apocalypse and giant robot apocalypse aren’t that far off from each other. Either way, the new Xbox contains the end of humanity.

Yeah, good luck selling the PlayStation 4 when everyone has been consumed by zombies. That’s airtight Microsoft marketing strategy for you. Your move, Sony.

(via The Verge, image via Eric Parker)