Get Those Cheevos: Microsoft to Offer Xbox Live Discounts Based on GamerScore 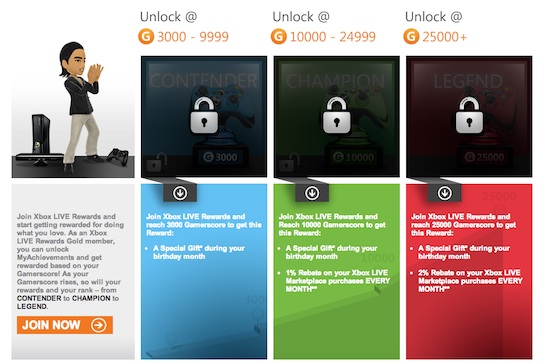 Everybody responds differently to the idea of Xbox 360 achievements (or PS3 trophies) differently. Some find the addition of arbitrary goals and an overarching progression system for gaming as a whole to be highly motivating, while others feel like they ruin the experience. Either way, I think everyone with a high GamerScore — either because they’re completionists or because they play a lot of games — agrees that they deserve to be rewarded for their efforts. Well, Microsoft is finally answering the call, launching a new Xbox Live rewards system that provides discounts on Xbox Marketplace for players who have earned enough achievement points.

The GamerScore rewards program features a three-tiered system. Players with a GamerScore above 25,000 points will get a two percent discount on Xbox Live Marketplace. Players who have earned between 10,000 and 24,999 points get one percent off. Lastly, any player who’s earned more than 3,000 points will get a special gift on heir birthday. To be clear, it’s not anything too excited about: the gift will have a value of 15 Microsoft points.

The discount applies to just about everything you can buy on Xbox Live, including XBLA games, DLC, movies, etc. The discount will apply when buying Microsoft points, though. It makes sense; a discount on both MS points and actual downloads would essentially be cutting the price twice.

Now, just because you have an insane GamerScore doesn’t mean you’ll automatically start getting the discount. At the moment, Xbox 360 users only receive the discount after signing up for the program. In addition to the discount, signing up means subscribing to an Xbox mailing list that will provide a “rewards statement”, but will also probably send you information about promotions, deals, etc. That said, some of those emails will include surveys, which may or may not net you free Microsoft points.

Even if you don’t take want to take a survey, getting the program means you can finally tell your mom that all those hours of playing Xbox actually got you something. (Besides hours of meaningful entertainment, of course.)