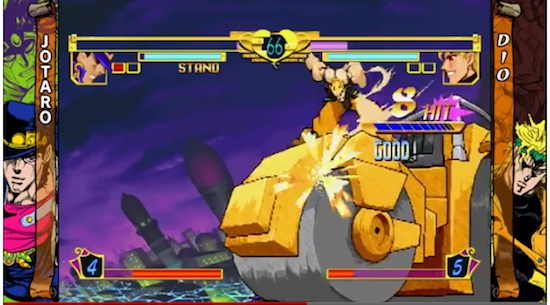 Fans of strangeness for its own sake — and the  peculiar variety of strangeness endemic to Japanese fighting games — have cause to celebrate; JoJo’s Bizarre Adventure is getting an HD remake for Xbox Live and PSN later this month. For those of you who never played the game in its original release — and there are a lot of you, no doubt, as I’m one of around three dozen people on the planet who seems to recall this game — imagine trying to play Darkstalkers while having a seizure. Except that when you win the match, there’s a manga-style comic book cut scene and then you’re playing a side-scrolling spaceship shooter. It gets odd.

Based on the long-running manga series of the same name, JoJo’s Bizarre Adventure is full to the brim with curious characters, like the Devo, a goth type who wields an evil marionette as his weapon of choice, or Iggy, who is a Boston Terrier with elemental powers. Special moves range from old standards like laser blasts and super punches, to maneuvers that freeze time or turn your opponents into children.

It’s not just that JoJo’s Bizarre Adventure is worth playing for the sake of weirdness, I would argue it is totally also worth playing just for the sake of weirdness. Face it, no other game will offer you the satisfaction that comes from winning a match by dropping a steamroller on your opponent — and then beating up the steamroller. Nowhere else can you snatch victory from the hands of defeat by turning the ground into a giant mouth that chews up your opponent and spits them out. This is the game that pioneered the martial strangeness that made the Guilty Gear series famous.

Like Guilty Gear though, the strangeness of the game is a factor, but not its raison d’etre. Behind all that weirdness is a surprisingly deep and deceptively complex set of mechanics. While a couple of characters basically act as clones of one another, the fighting styles are widely varied enough that playing with a different character can seem like playing a different game entirely. The learning curve is excellent, providing a stable full of fighters that are generally easy to get the hang of, but difficult to really master, with techniques like controlling your character’s Stand — a magic shadow that can punch, stab or swallow your nemesis as the situation dictates — independently, or programming combos to release at the right moment, which is exceptionally difficult, yet totally compelling.

It doesn’t all work, but it doesn’t have to. Some of the weirdness on display here caught on in later games, while other aspects of it, like the Stand system, were relegated to the dustbin of history, and are not badly missed. At $19.99, it’s a little pricey as far as HD updates go, but if you’re looking to get a peek at a little-known and wholly underrated fighter from Capcom’s unapologetically weird era, JoJo’s Bizarre Adventure makes for a pretty worthwhile history lesson.