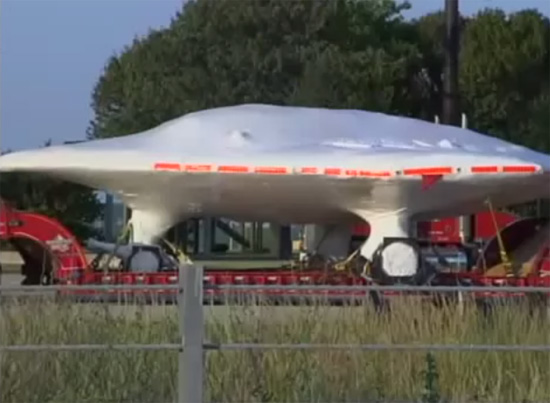 This past weekend, a mysterious object was spotted on the back of a flatbed truck off I-57, south of Champaign, Illinois. Many contacted the local news claiming to have spotted a UFO being transported by truck. Now, it has come to light that this was one of the stealthy X-47B drones on a road trip across America.

Weirdly shaped and wrapped in white plastic, highway drivers’ curiosity was no doubt piqued by the police escort who refused to allow anyone near the secret cargo as it sat in a rest stop off the freeway. Of course, it didn’t help that the wings had been removed from the wedge-shaped aircraft, making it appear even more saucer-like.

The truth of the matter is far less dramatic. Northrop Grumman, who have developed the X-47B for the Navy, only built two of the aircraft. For several months, both were at Edwards Air Force Base in California, where they underwent initial testing and both took their first flight. Those tests completed, the two aircraft have been moving east to the Naval Air Station Patuxent River in Maryland.

The first of the aircraft, called AV-1, arrived earlier in the spring and has been undergoing electromagnetic interference testing since May. The second craft, the one spotted in Illinois, will soon join its sibling and both are slated to begin aircraft carrier landing tests in 2013 and aerial refueling tests in 2014.

Of course, this isn’t the first time the X-47B has attracted a lot of attention on the road. Back in December, another X-47B drone (presumably the AV-1) was seen passing through Kansas where it also made a bit of a stir.