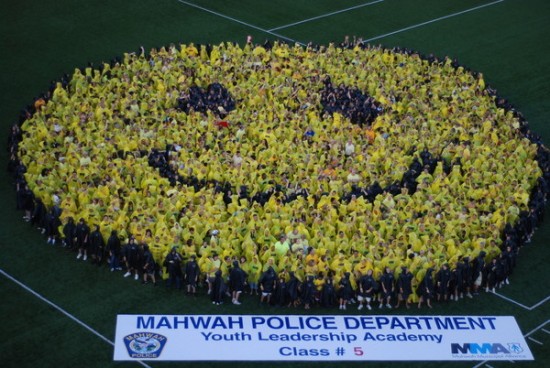 Last night, 2,226 people met up at Continental Soldier’s Park in Mahwah, New Jersey, donned colored ponchos, and formed the largest human-made smiley face ever made. Guinness Book of World Records officials were not present during the formation, but pictures and counts from the event will be submitted to the agency and, when deemed accurate, the formation will have officially broken the previous record, 768 people set on May 6 of this year, by over three times.

The group of people posed together for a little longer than ten minutes as a Black Hawk helicopter circled above the park while the pictures were taken from a fire truck ladder. The event was organized by the Youth Leadership Academy, a summer program for children in the town. It is expected that Guinness will take about four weeks to process the record.