If You Like Sifting Through Loose Papers, the World War Z Mobile Game’s for You 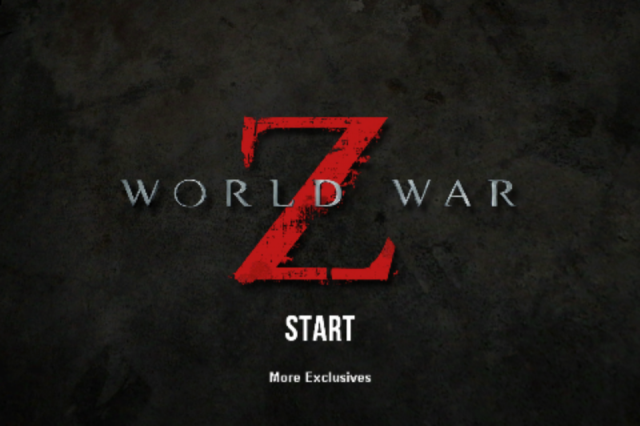 Listen: I wanted to like the new World War Z mobile game for iOS from Phosphor Games, I really did. I’ve heard amazing things about the book, but thought the trailer for the movie was really stupid, and was hoping that the video game would be not unlike The Walking Dead game in terms of being able to hold my interest more than the source material does. Sadly, it’s not like that at all. Instead it’s an unambitious, unimaginitive first person shooter that made me wish I were reading the book instead.

First let’s start off with the loading screen, which by the way took forever. This may be due to the fact that I was playing the game on a fairly old iPhone 4 (which also made the game pause in the middle of playing just enough to be ridiculously frustrating), so if you have an iPad or 5, you might have an easier time of it. If you don’t, though, here’s what you have to look forward to: 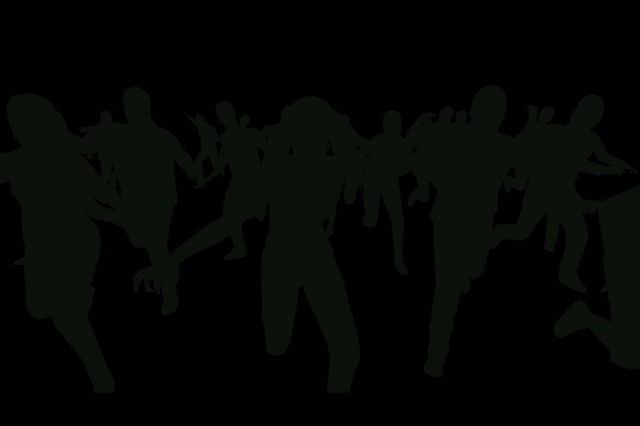 Yeah, that’s it. A black screen. It’s supposed to be: a bunch of zombies running in a pack! This, actually, would make for a great loading screen if you could  see the things. I couldn’t make it out on my phone, but it looks pretty okay after uploading the image. Sadly, this is pretty indicative of the level of thought that went into the game — you can see where it might have been good if only they’d looked over it more than once.

You are Doug, a pilot from Denver with an ex-wife and son who live in Japan. Your ex-wife is named Claudine and has red hair; your son is named Rob and you haven’t seen him since he left puberty. You learn all of this about yourself in a horrible info-dump of a phone conversation between you and your best friend Terry, just seconds before your son calls to tell you… that his mom went crazy and tried to kill him. Sigh. So it’s going to be like that? We’re going to fridge stuff the ex-wife already? Great. 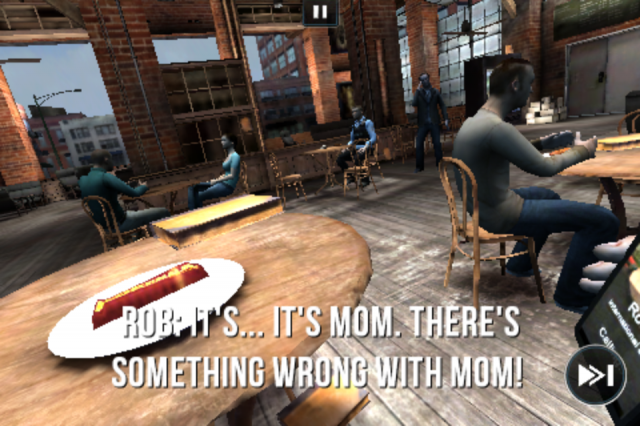 But before you can tell your son to aim to remove the head or destroy the brain, a giant airplane full of zombies crashes into the café you’re sitting in, and just like that, we’re off!

Here’s how you kill the zombies: You find a gun, and when they appear in your line of vision, you automatically draw it and begin shooting. Seriously, you don’t decide when to fire — the second you line the touch screen up with any part of a body, it just goes off on its own. This was probably done to save you the trouble of trying to hit such a small target on your little iPhone screen, but it has the unfortunate side effect of wasting all your bullets on non-lethal shots. Luckily, every zombie also drops bullets, so you’ll only run out of bullets if you’re a really bad shot, or if your iPhone lags so much that you can’t help but shoot a zombie in the arm over and over again until you’ve got nothing left. Not that that happened to me six times or anything.

However, if a zombie gets too close to you, you have to fight it off with a crowbar instead. You do this by tapping the screen to duck and then swiping at it to — well, swipe at the zombie. This took me more than a couple of tries to get right, as often I would accidentally swipe to duck on instinct and end up taking a lot of damage. From a zombie that looks like this, by the way: 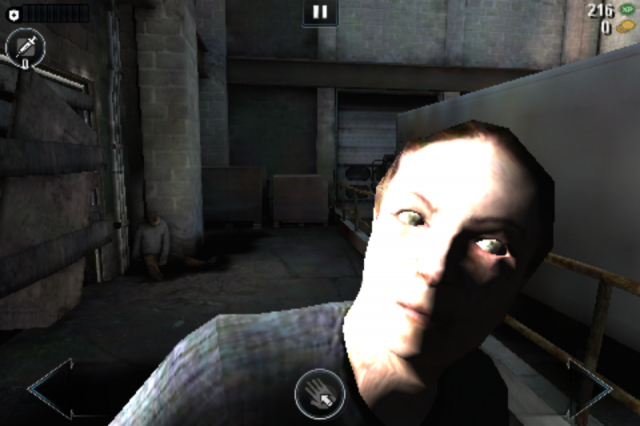 Yeesh. That is not scary in a good way. That is a very bad kind of scary.

Speaking of which, here’s another thing I noticed: After about an hour of gameplay, I don’t recall seeing a single female zombie or corpse, which is straight-up bananas. Don’t get me wrong, I’m not accusing the game developers of being sexist — I’m accusing them of being too lazy to design more than one model of zombie. We make up 50% of the population, guys! It’s not like your male zombies looked all that good anyway, you could have taken some time to make some lady versions!

Although, actually, I forgot — there was a female model at the beginning of the game. With whom Doug is about to flirt. 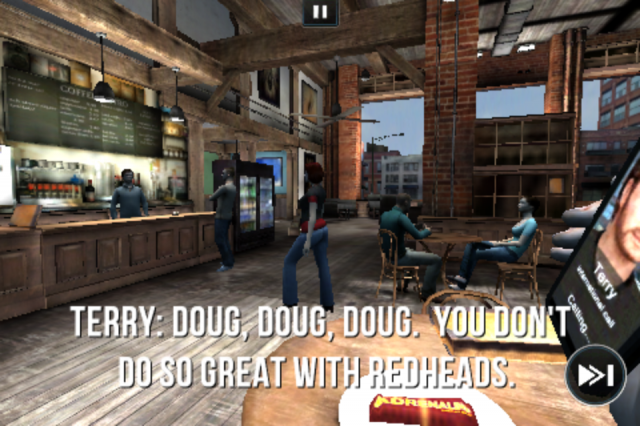 Okay, never mind. Maybe I am accusing them of being sexist.

Anyway, between getting accosted by the incredibly creepy undead, there are other tasks you can accomplish while tapping your way through post-apocalyptic Denver. For example, you get experience points every time you look at a dead body. Why? I don’t know! You also get them for touching computer keyboards and for rifling through paper on desks and in filing cabinets to retrieve special yellow ones. You then use those experience points to upgrade your character’s weapons and armor — which is initially a bunch of newspapers held together by duct tape; I thought that was pretty funny. If you were just chilling in a cafe when the apocalypse struck, what else would you have at your disposal?

Granted, the swiping animation for all that paper-rifling is well done, but — why? What purpose do yellow papers serve? Are they envelopes full of money or something? Why does everyone use the same brand of manilla envelope in Denver? Why would you even need money when literal tsunamis of zombies are overtaking your town? Reveal to me your secrets, game! 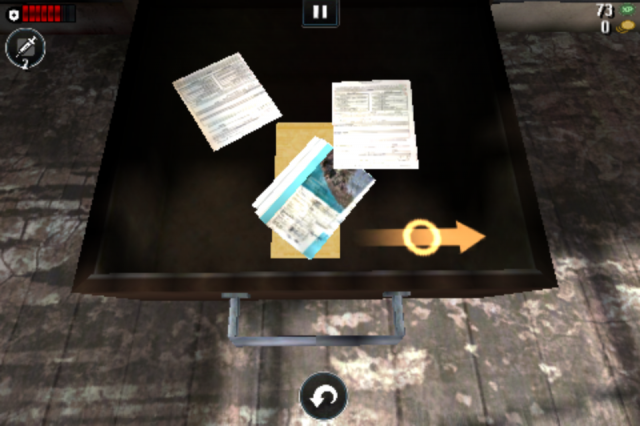 That all being said, some of the cutscene animation was actually kind of cool when it wasn’t mind-numbingly annoying. Because this is a movie tie-in, there was bound to be a scene with a terrifyingly fast physics-defying zombie horde running at you as they do in the trailers, and the game certainly delivered in that respect. 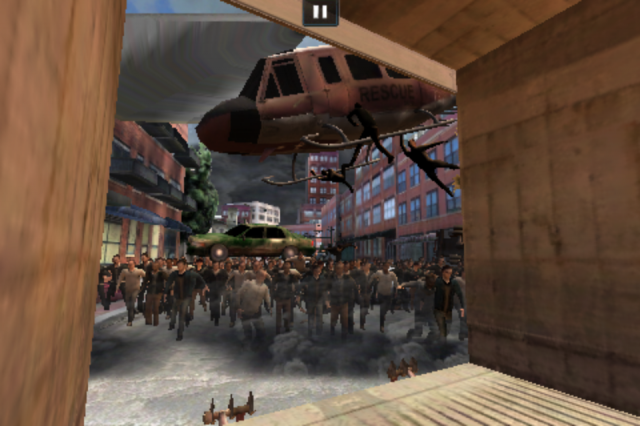 I’ve got to admit, I hate the hordes in the trailer, but I enjoyed them here. Maybe just because I was happy to take a break from all the  paper-rifling and enjoy some semblance of a story. That, or I had subconsciously given up and was welcome to the idea of getting ripped apart by mindless horrors. Either/or.

All in all, I didn’t have a whole lot of fun playing this game, as evidenced by the above whining. If it were free, I’d say it might be worth a download. Seeing that it costs $4.99 on the iTunes app store, however, I recommend that you purchase at your own risk. You still might enjoy it if you’ve got a brand new iPad with better graphics than my old beaten-up phone (I just looked over at the iTunes page and WOW, was this even the same game? Their screenshots look miles better) and are really that starved for a new zombie shooter. Otherwise you should probably just suck it up and read the book already. In fact, I’m going to go out and get a copy right now. Hooray for reading!