You're shocked, I know. 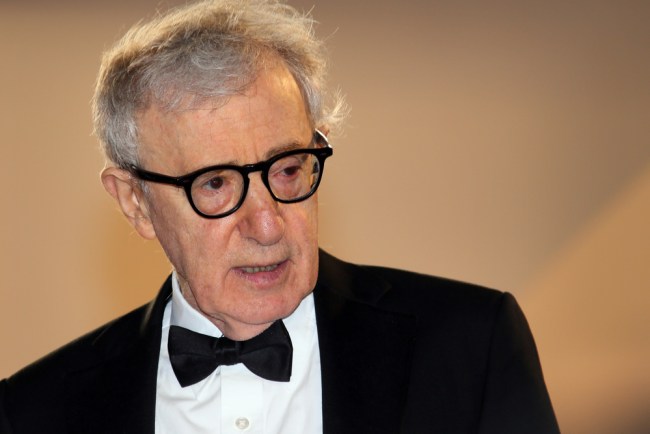 Update: I realized I never wrote this out explicitly, since I figured pretty much every TMS reader knows this about Allen already. But, for clarity: Woody Allen’s adoptive daughter, Dylan Farrow, wrote that he sexually assaulted her when she was a child; Allen also began a sexual relationship with his other stepdaughter, Soon-Yi Previn, when she was approximately 22 and he was approximately 57. He eventually married Previn. So that’s the context of his garbage response below.

Surprising exactly no one, Woody Allen’s reaction to the sexual violence allegations against Harvey Weinstein was pretty garbage. While he rightly acknowledged that it’s “tragic for the poor women that were involved,” his natural sympathies seemed to lie with Weinstein and other perpetrators, as he lamented how “[Weinstein’s] life is so messed up” and worried that the revelations would lead to a “witch hunt atmosphere” where a man can no longer “wink[] at a woman” at work.

In his statement to the BBC, Allen first denied knowing about the Weinstein allegations during his career. “No one ever came to me or told me horror stories with any real seriousness,” he said. “And they wouldn’t, because you are not interested in it. You are interested in making your movie. But you do hear a million fanciful rumours all the time. And some turn out to be true and some – many – are just stories about this actress, or that actor.”

This quote is just so full of sexist tells.

“With any real seriousness.”

There is a time and a place for some of these ideas. Hollywood, thanks to a flourishing gossip magazine scene, is certainly full of untrue rumors and exaggerations. Fair enough. But when a man feels the need to mention that as part of his response to accusations from dozens of women, it says a lot more about that man than it does about the Hollywood scene. It says a lot about whether he believes women, and whether he wants others to do so as well.

For a moment there, I thought Allen was saying something acceptable, emphasizing the tragedy of what’s happened and pointing out that Weinstein’s behavior, rather than being some sort of understandable vestige of “old dinosaur” Hollywood culture, is deeply “messed up.”

But then he followed up these sympathies by saying, “You also don’t want it to lead to a witch hunt atmosphere, a Salem atmosphere, where every guy in an office who winks at a woman is suddenly having to call a lawyer to defend himself. That’s not right either. But sure, you hope that something like this could be transformed into a benefit for people rather than just a sad or tragic situation.”

I’m sorry, but should worries about a “witch hunt” really be your primary, first-reaction response to this situation? Oh, gee, I hope this backlash against predators stops with Weinstein! It’d be awful if routine sexual harassment at the office were no longer acceptable! As with Allen’s “rumors” aside above, there is a time and a place to discuss the concrete details of how the industry wants to address future allegations. There are valid questions about how we balance the rights of the accused against the needs of the victims and the moral necessity of providing a safe workplace.

But when that’s one of your first concerns, in your first statement on the issue to the press, it’s a tell. It tells me you prefer a world where Weinstein’s victims are “tragic,” rather than empowered to change the system that failed them. It tells me what really frightens and disturbs you about these allegations: Sure, sure, the poor victims, but who will think of the powerful?!

(Via The BBC; image via Shutterstock)