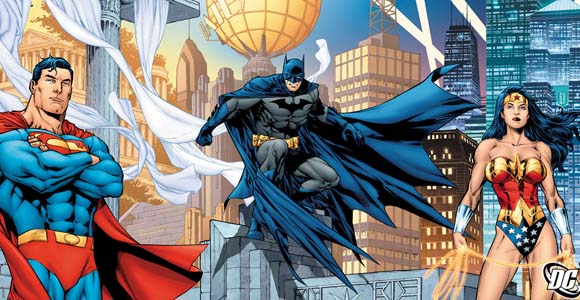 We’ll believe it when we see it.

Warner Bros. is busy-busy with preparations for Zack Snyder’s Man of Steel sequel (possibly called Batman vs. Superman but that’s still not been officially announced) and while Ben Affleck is set to play Batman in the film, we’ve yet to hear anything concrete about the story other than it will take inspiration from The Dark Knight Returns (which to me, doesn’t make a whole lot of sense).

But many are still holding out hope Warner Bros. will be including Wonder Woman in this film in some way and a recent report is surmising that could be true. Variety cites “sources” in an “exclusive” story saying several actresses have been testing for a role in the film:

Sources tell Variety that “Fast and Furious” actress Gal Gadot, “G.I. Joe: Retaliation” thesp Elodie Yung and Olga Kurylenko have or will test for the female lead, which appears to be the role of Diana Prince aka Wonder Woman. Sources stress there’s still a possibility this role could be Bruce Wayne’s love interest, but the casting description of “tall, brunette, athletic and exotic” also matches that of the Wonder Woman character in the comics.

Are the sources saying the female lead appears to be Wonder Woman or is that Variety putting in a guess of their own? It’s hard to tell but from where we stand, if Wonder Woman is actually going to be your female lead and not just a guest star, her name better be somewhere in the title. That being said, “Bruce Wayne’s love interest” makes a lot more sense, especially if a slightly more well-known actress will eventually land the Wonder Woman role, which we guess is the case.

Just recently, Thor: The Dark World’s Jaimie Alexander put the spotlight back on herself for the role when she mentioned talking to “both companies” about superhero movies.

“I would love for DC to put Wonder Woman in one of their upcoming flicks, either in her own movie or Batman vs. Superman, or just something even to introduce her,” she said, “I would absolutely love that. Thankfully and gratefully, I’m appreciative to the people who ask my opinion of the character, and that’s been pretty amazing.”

Variety went on to say, “The Wonder Woman rumor has been kicking around for some time, and insiders believe the plan is to have not just Batman and Superman in the film but several members of the Justice League as well. It’s unclear which members, but Wonder Woman (Diana Prince) and the Flash are said to be locks to make an appearance in some fashion, whether that’s a significant role or a cameo.”

There’s always the chance everyone involved with the project has been extra coy when talking about Wonder Woman specifically because they do have something set for her but I’m not putting money on it considering what we’ve heard recently.