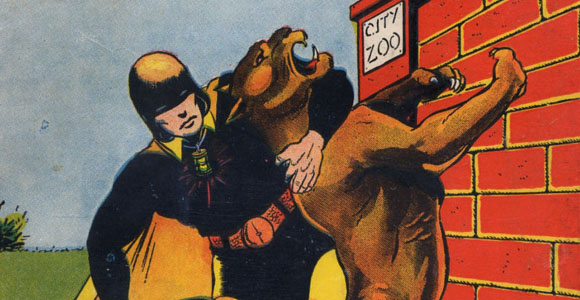 Warner Bros., I am disappoint.

Before I go any further, let me say, I actually like Hourman. I think he’s a fun character. He was created by Ken Fitch and Bernard Baily and has had a few incarnations along the way – Rex Tyler, Rick Tyler, and Matthew Tyler. Most of my experience with the character comes from Geoff Johns’ Justice Society of America version (and beyond), the man who has a successful marriage to superhero Jesse Chambers, aka Liberty Bell, aka Jesse Quick. His powers grant him the ability to see one hour into the future (but with random visions) and also super strength, speed, etc. (also for a limit of one hour) by using a drug called Miraclo. Also, he can only use that drug once a day because it’s not so great on the body. That being said, as a superhero, he’s pretty lame.

The proposed series would air on The CW but what direction will they take with the character? According to The Hollywood Reporter:

Hourman centers on a brilliant-yet-troubled pharmaceutical analyst who discovers that the visions that have plagued him since childhood are actually glimpses of tragic events occurring one hour in the future. Determined to win back his ex-wife and son, he heroically prevents these tragedies from unfolding, finding both purpose and redemption along the way.

So…supernatural elements but not quite superpowers per se. From the report, it seems as if we’ll be getting the original version (at least by name, anyway) of the character, Rex Tyler. They also gave a few details on the creative team involved, “Michael Caleo (Ironside, The Sopranos) will pen the script and executive produce the drama alongside Dan Lin and Lin Pictures’ head of television, Jennifer Gwartz, for Warner Bros. Television, where the banner is under a new two-year overall deal.”

Where do I begin? Not only is this Hourman series coming before tons of more recognizable female characters (even those you’ve already introduced on your television shows) make it to the big or small screen, it’s also coming before things like the proposed Booster Gold or Blue Beetle television shows, both of which were discussed at one point and would likely be a lot more interesting for a general audience. And although The CW apparently had a Wonder Woman-centric show in the works (Amazon), there’s been no news of it since May (when it was being “redeveloped”) and all those Warner’s execs talking about how Wonder Woman should have some sort of project, certainly haven’t mentioned it by name.

Warner Bros., I love your characters. I have since I was a child. But you are making me want to forget that love completely. Like, Eternal Sunshine of the Spotlless Mind-erase your intellectual properties from my mind. I’m not sure what your overall media plan is but I can say with some degree of certainty that Hourman is an odd choice of character to try and make a household name. How about Vixen, Jack Knight Starman, Black Canary, Stargirl, Mr. Terrific, Madame Xanadu, Wesley Dodds Sandman, Black Alice, Power Girl, Supergirl, Manhunter, Zatanna…I could keep going if you want.