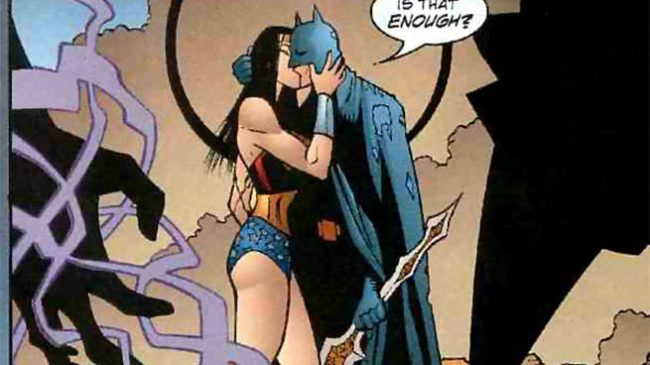 Apparently, this is all Joss Whedon’s fault.

The “WonderBats” pairing in the DC Universe isn’t new: it has precedent in the comics—though Bruce Wayne and Diana Prince ultimately decided not to try a relationship, preferring to preserve their friendship—it’s shown up in animated series, and the two most recent movie outings tried to jam the potential for this superheroic hook-up into our brains.

Because, I guess, previous canon that must be adhered to even if many other aspects are remade or entirely new in the DC movie verse?

The whole framing premise that prompted Diana’s flashback in Wonder Woman came about because Bruce had dug up the old photo of her during WWI alongside Steve Trevor and friends, and sent it to her in France (rather dramatically, in an armored car and guard). It was implied that Bruce cared enough to want to know more about her and to use his resources to track down this hidden piece of her past, and hoped that one day she’d share her secrets with him. Cool, cool, cool. Friends can do that too! But the inclusion of those scenes made me think we were also being primed for a possible future Bruce/Diana set-up, and it seems like we may be seeing more of that much faster than I imagined.

Comicbook.com reports that Ben Affleck, a.k.a Batfleck, mentioned that Joss Whedon’s extensive reshoots after he stepped in for director Zack Snyder added an enhanced Bruce/Diana interplay:

According to star Ben Affleck, the reshoots made by Joss Whedon added some heat between the Dark Knight and the Princess of Themyscira.

During a conversation with Entertainment Weekly about the new changes, Affleck revealed that Whedon’s scenes allowed Batman to “play the dynamics, the sexual tension with Wonder Woman,” among other contributions.

I truly don’t intend to offend any fans of the Bruce/Diana pairing (I ship enough things as it is and support all ships), but I just can’t keep from feeling that, even if the DCEU goes full-scale Bruce/Diana someday, it was not needed right here, right now. It’s not that I dislike the pairing—I’ve rather enjoyed it elsewhere—but the timing troubles me.

This is the first Justice League outing, and it annoys me to no end that the one female member simply must have “sexual tension” with someone, let alone with her teammate and friend when they have much bigger fish to fry. Just let them all bicker and bond and fight together and save the world, okay? Not every movie needs to have romantic feelings shoehorned in—look how well Thor: Ragnarok worked without that distraction—and I don’t think it needs to be here. At all.

This seems to have actually been the original plan for Justice League, but then Joss Whedon’s reshoots had to go and add in an increased attention to “sexual tension.” It was my understanding that Whedon was there to wrap things up and help lighten the story with humor, but I guess he couldn’t help himself. I’ll leave Whedon’s personal life out of this and simply say I have little faith in his romantic choices and instincts when it comes to superheroes.

The out-of-left-field, uncomfortable attempt Whedon undertook to match up Natasha Romanoff and Bruce Banner in Avengers: Age of Ultron still leaves a sour taste in my mouth. Among the MCU fans I know, it’s the most unpopular onscreen pairing yet. It had zero precedent or chemistry, it gave us a deeply troubling scene of Natasha Romanoff lamenting her lack of fertility that made me want to set the world on fire, and yet Whedon clearly thought it was a great idea. And let’s not forget that his original Wonder Woman script had scenes like Diana doing a seductive dance in order to distract the bad guys. You’ll excuse me if I don’t give a good damn about Joss Whedon’s emotions where Wonder Woman is concerned, except to eye them suspiciously. 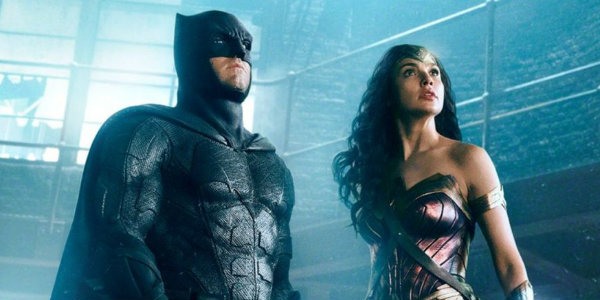 It’s more difficult for me to leave Affleck’s personal life out of this equation, because while I know Batman is a character unto itself and Affleck is an actor (who may not even be around for all that long), we can’t always divorce these things in our minds, nor should we. Since the Weinstein scandal broke, multiple women have come forward to accuse Affleck of sexual harassment as well as complicity in others’ harassment, and it’s going to be really hard for me to stop thinking about that when I see him onscreen. This queasiness triples when I think about him having “sexually tense” scenes with Diana/Gal Gadot. And considering Gal’s recent heroic stance against harassers like director Brett Ratner, it makes me wonder how she’s feeling about it at the moment.

To quote our Marykate Jasper when she sent me the Comicbook.com link, “VOMFEST.”

I don’t believe that actors and other creators get to separate themselves from their real lives when it comes to their work. We often go to see movies starring stars that we love precisely because we love them, and their offscreen behavior does matter, especially when it is egregiously bad. This is why the cretinous Kevin Spacey is getting replaced on projects or having his projects totally shut down. This is why Mel Gibson fell from grace for a long while, though not nearly long enough. This is why no one should still be working with Woody Allen. And this is why I’m going to flinch even more every time I see any hint of flirtation or “tension” between Wonder Woman and Batman in Justice League, enacted by one actor I adore, Gal Gadot, and one that I wouldn’t mind seeing unemployed for a long while, Ben Affleck.

Narratively, that sexual tension didn’t really need to be there this go-round, and due to recent revelations about Justice League‘s caped and cowled star, I wish, very much, that it was not there at all.