But are any of them Red Sonja's type? 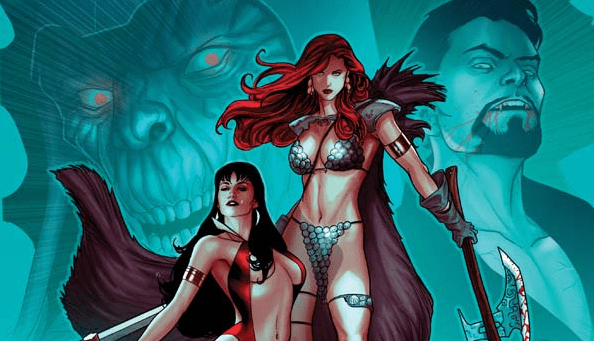 Fans of Gail Simone’s current run on Batgirl are lamenting the comic book writer’s eventual exist from the series when it switches over to Cameron Stewart, Brenden Fletcher, and Babs Tarr, but Simone’s promised us all that she’s moving on to some very exciting projects. Today, one of those new projects was announced: a Dynamite Comics crossover between Red Sonja, Dejah Thoris, and Vampirella.

According to the press release, The Women of Dynamite —which is the working title—will bring the She-Devil with a Sword, the Princess of Mars, and the vampire-hunting daughter of Lilith together with several other female characters in one adventure story.

This isn’t the first time Dynamite’s mashed their characters up together though; Bill Willinghan’s recent Legenderry: A Steampunk Adventure featured Dynamite characters in a steampunk setting, and Ron Marz’s Prophecy storyline in 2012 (where the above image of Sonja and Vampirella is from) had a giant crossover event to put a stop to the Mayan Apocalypse. But its focus on the company’s female characters is certainly promising, as is its dependence on Simone to set the tone.

“After working so closely with Gail on Legends of Red Sonja, I am excited to see where we’ll be going next with this epic character crossover,” Associate Editor of Dynamite Molly Mahan said in a statement. “The concept of a Women of Dynamite series has been something we’ve been circling around for a while now, but had to wait for the right concept and creators to come together to make the story as worthwhile as the concept. We are lucky to have Gail as the cornerstone on this project and I know we’ll craft something that the fans and comics community will enjoy across demographics.”

Simone has been writing for the Red Sonja comic since July of last year to great success, and assembled a crack team of all-female writers for the aforementioned 40th Anniversary Legends of Red Sonja project around the same time. She’s also due to contribute a story to the upcoming Vampirella: Feary Tales miniseries as well. In the statement, she notes how excited she is that while “doing this big, fun, noisy event book, full of action and fun and drama and sex and villainy,” she’ll get to “work with some of the most talented female writers in the industry.”

As yet, there’s no word yet on when this new title will be available.