More Women in the Senate | The Mary Sue

History Is Made: There Was a Line for the Women’s Bathroom… in the U.S. Senate 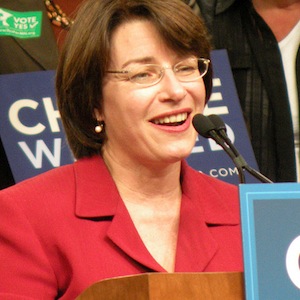 For the first time, there was a traffic jam in the Senate women’s bathroom. There were five of us in there, and there are only two stalls. – Amy Klobuchar (D-Minn.)

Ah, the unforeseen consequences of the 2012 U.S. election cycle, as reported by Amy Klobuchar, senator since 2007. After all the ballots were counted and votes tallied, American voters were shown to have ushered in a record for female representation in the Senate: 20%. Maybe they’ll consider opening up another lavatory?

Previously in the 2012 Elections