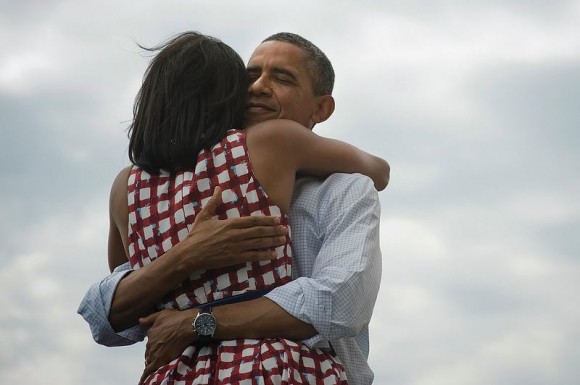 Right, right, victories for women and minorities in the polls last night, but we all know that the victories of the internet come first. Ladies and gentlemen, you are looking at the majority content of the world’s newest most tweeted and most Facebook-Liked post in history. This picture, with the text “Four more years.” was tweeted by and posted on the Facebook wall of President Barack Obama last night. Within the first hour of the tweet’s existence it generated almost 370k retweets, sitting at 661,267 retweets as of this post, while the Facebook post has a whopping 3,270,011 likes.

You did it, America. You made internet history.

All joking aside, let’s talk about how there are going to be more female senators than ever before in history starting next term.

Joining as freshman senators are Republican Deb Fischer of Nebraska, Democrats Elizabeth Warren (Massachusetts), Tammy Baldwin (Wisconsin) and Mazie Hirono (Hawaii). They’ll be joining Kirsten Gillibrand of New York, Maria Cantwell (Washington), Dianne Feinstein (California), Amy Klobuchar (Minnesota), Debbie Stabenow (Michigan), and Claire McCaskill (Missouri), all of whom won reelection. McCaskill was not expected to do so, at least until her opponent, Todd Akin, stated in public that one of the reasons he supported restrictions on abortion even in cases of rape was that conception was rare in cases of “legitimate rape” because a woman’s body had ways to “try to shut that whole thing down,” betraying a fundamental misunderstanding of not only the biology of half the human race but also the definition of rape.

With two of the previously record-setting seventeen female senators retiring, all incumbents winning, and four new female senators, that brings the total to nineteen out of one hundred. (A number that will be upped to 20 if North Dakota’s Heidi Heitkamp‘s apparent upset victory over Republican candidate Rick Berg is confirmed.) Still along way from equal representation, but still exciting! And that’s not the only first.

Newly elected Mazie Hirono is the first woman senator to serve Hawaii and the first foreign-born woman of any Asian nationality to serve in either house of Congress. She’ll also be the first Japanese immigrant elected to the Senate, as well as the first Buddhist and first Asian-American woman. Tammy Duckworth, a disabled veteran who lost most of her legs co-piloting a Black Hawk helicopter that was struck by a RPG, is now the first female veteran and first disabled woman to serve in the House, not to mention Congress’ first Thai-American member. (She was born in Bangkok to an American father and a Thai mother, grew up in Singapore, and speaks fluent Thai and Indonesian). And Tammy Baldwin of Wisconsin is now the first openly gay member of the Senate.

In other exciting news? Colleen Lachowicz, a Maine state senate candidate who drew an involved smear campaign from her opponents focused on the fact that she plays and enjoys World of Warcraft… won. And last but certainly not least, Maine and Maryland have voted in marriage equality, Minnesota voted down a resolution that would prohibit marriage equality, and Washington state’s ballot to legalize gay marriage is still fighting along at too close to call, with results not expected until tomorrow at the earliest. However Washington turns out, this still marks the first time in history that voters have created, by vote (instead of upholding or striking down existing decisions made by the courts or legislature), marriage equality in their state.