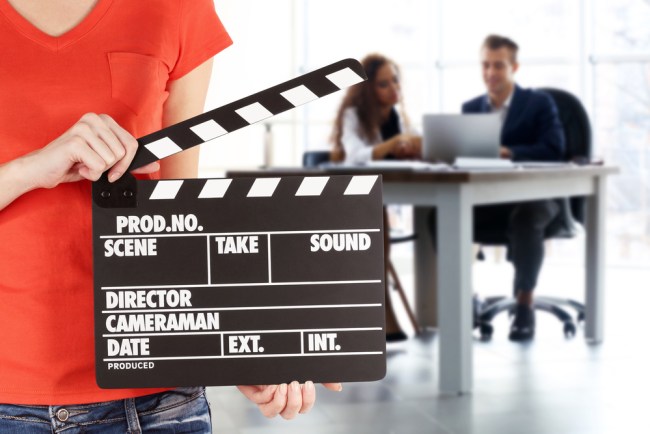 These frank testimonials may ring familiar with women in many other industries, too.

Yesterday, a Facebook friend of mine who works in film and TV production began a thread that prompted, “being a woman in the entertainment industry is …” and then she and her friends and colleagues began to fill in the blanks in the comments.

Reading through the responses was harrowing; while some incidents and behavior were known to me, there seem to be situations that women who work behind the camera and behind the scenes are especially subject to in an appearance and youth-obsessed environment. Since much of the conversation around Harvey Weinstein has been focused on his interactions with actresses, I wanted to show that the culture of pervasive sexism and harassment extended to those who are not directly in the spotlight. It’s everywhere.

These answers are reproduced here with permission.

“Being a woman in the entertainment industry is …”

…waiting weeks to mention your husband so that people will still take meetings with you.

…having your partners treat you like a PA to the rest of the crew.

…getting unwelcome backrubs all. the. damn. time.

…knowing that you have to leave any event by midnight, because after then, everybody is just trolling for ass.

…being given marching orders to screw other women out of money or rights, to keep your own job.

…being open to a constant running commentary on the state of your appearance, good, bad, or otherwise.

…having old bosses send emissaries to check in on you for years after you leave to make sure you aren’t spreading gossip or stealing ideas.

…having people you work with openly pontificate about people they would like to see you sleep with.

…having men working on another project entirely step in to your timeline to “fix” it without anybody asking.

…constantly being given a look of incredulity when you say you know how to fix something, even when you are the only technical person in the room.

…never being believed, whether it’s if an idea you came up with is good, or a powerful person is harassing you.

…watching waitstaff at a prestigious restaurant cower in fear at your boss and go to the grocery store to buy something for them that wasn’t on the menu.

…being told you’re good at “organizing stuff” when in reality you’re not great at it all, but get put in the position of wrangling a crew full of men who don’t even like to be told what to do anyway.

…stepping over a girl passed out in a hallway, as a musician steps out of the door zipping up his pants, and when asking if she is ok, having the man shrug and say “that’s rock and roll.”

…having your idea go unnoticed, until a man in the room repeats it as his own and suddenly it’s the best idea ever.

…being the only person in a room with practical experience, but having the boys shuttled off to production jobs, while you get assigned to be a hostess at a party, because you have a vagina.

…watching your male colleagues’ careers take off, when you all started in the same place. knowing it’s not just their luck

…knowing which fabric stores to avoid, if you don’t want to get propositioned by the owner.

…putting on makeup to go shopping because the vendors give you better deals.

…putting on makeup to go anywhere, because if you don’t, you are invisible.

…telling friends with genuine hope and optimism that somebody is just trying to get in their pants.

…being told to accommodate male directors who rant and rave like spoiled children; being labeled a drama queen when you finally break—because you cry when you’re angry.

…being sexually harassed on every single gig until you age into unfuckability.

…having your female mentors constantly warn you off expressing any sort of emotion.

…being directed to make your female characters look sexier for no dramaturgical reason whatsoever.

…hearing every woman actress of every ages’ body insecurities from a lifetime of being treated like an aesthetic object.

…every woman in production has these stories. every. single. one.

There are dozens of additional comments in the thread, from a range of women, but I think you get the idea. Even just reading these made my skin crawl and my jaw drop. I’ve experienced my share of sexism in the places I’ve worked, but it sounds as though the behind-the-scenes world of the entertainment industry is a whole other animal. Sexism and harassment appears to be the default mode that women are forced navigate in order to keep their heads above water. And what struck me was how many women joined in to “like” or comment on one of these replies, saying “YES, THIS,” or “EVERY DAY,” showing that this kind of behavior is sadly and horribly widespread.

Editor‘s note: It was difficult to find a stock picture for this article. Almost every “woman behind the camera” search showed an actress, a woman smiling broadly with a clapper, and “woman director” brought up a host of pictures like this: