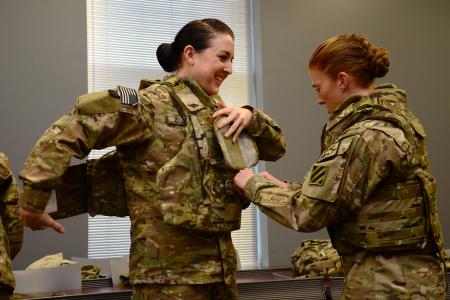 It’s safe to say, having body armor that doesn’t fit correctly is almost no armor at all. That’s why we’ve been following the development of body armor for women in the armed forces so closely. Previously, the armor was in a prototype stage and being worn by the 101st Airborne Division out of Fort Campbell, Kentucky. It turns out, the women of the 1st Armor Brigade Combat Team, Third Infantry Division are being deployed to Afghanistan soon and when they do, they’ll be wearing armor that fits.

Yes, this is so long overdue it makes our brains hurt but it’s a day to celebrate nonetheless.

“The push to create these new vests began in 2009 when the 101st Airborne Division reported issues female soldiers were having with the fit and maneuverability of the recently fielded Generation II IOTVs,” wrote DVIDS. “On Wednesday, the 1st ABCT FET gathered in a small room with the lead product engineer of the Generation III Female Improved Outer Tactical Vests and officially became the second group in the Army to ever receive the new equipment.”

Surveys by the U.S. Army found a majority of women soldiers were wearing body armor too large for them and eventually led to a shift in thinking.

“We, as a military, have to truly accept that our female soldiers are combatants, they are in harm’s way and this battlefield does not have a frontline,” said Master Sgt. Jeff Fenlason. “As we have recognized that tactically, we are now getting caught up equipment wise and in training.”

Many of the women who tried the new armor on could not say enough good things about it.

“I can actually move my arms now,” said Private 1st Class Mary Kidd. “It covers the places that it is supposed to cover, and now that it fits the whole vest feels a lot lighter.”

“The vest is vastly going to improve my ability to defend myself with a weapon,” said Cpt. Orielle Buentello. “The old vests were too wide on my shoulders and high around my neck. Now, I feel like I have an extra two inches of reach through my arms and I will be able to get a proper sight alignment, making it easier to hit my target.”

Eight women from the 1st Armor Brigade Combat Team, Third Infantry Division are serving as the final test for the body armor as they head to Afghanistan soon. If all goes well, the creators hope to hand out 3,000 vests by the summer of 2013.