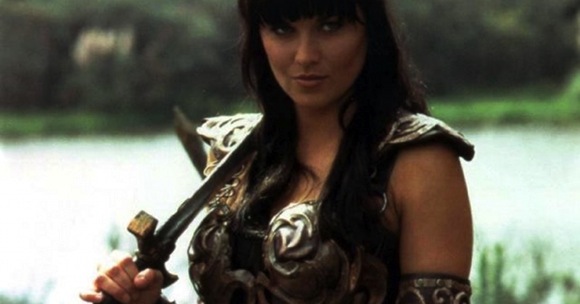 We’ve reported before on the military’s efforts to create female-specific body armor, which is kind of an important thing to do because it’s not the ’50s any more and women do go into combat situations and would like their armor to fit them if they’re gonna get shot at, y’know? The latest update on the situation, back in July, was that Army engineers were developing an armored vest with “bra-shaped darting,” a technique inspired by Xena: Warrior Princess (AIYIYIYIYIYIYIYI—OK, I’m done). And now, just over two months later, the Xena-fied armor is leaving the lab for the battlefield on the persons of 19 women with the 101st Airborne Division out of Fort Campbell, Kentucky.

Granted, this is only the prototype stage, and it’s not yet been determined when the vest, which is lighter and shorter in addition to having room for breasts, will be ready for a roll-out to the Army at large, but–Jesus, it didn’t take all that long to get to this stage, did it? It’s almost like creating this armor was a fairly easy thing to do that could have easily been accomplished ages ago. Harumph.

Still, to accentuate the positive (this is very, very good news for the 14 percent of the Army that is female, after all): The soldiers who have tested the new armor quite like how it gives them the flexibility necessarily to easily perform everyday soldierly tasks—like positioning a rifle against their shoulder, getting in and out of tight spaces, even just bending over to pick something up—in a way that their previous male-shaped armor did not.

Comparing the old with the new, Spc. Gilliann Campbell states:

“I remember as a joke, my friends tipped me upside down and my old armor fell right off me. It didn’t fit me at all. But with this, I did a cartwheel when I first got it and it did not move at all.”

Fingers crossed that it won’t be too much longer before the armor’s ready to be distributed to all the IRL Xenas serving in the armed forces. And kudos to the Army for finally making this happen.