Wanda The Wombat Given A Hip Replacement

Australian wombats have better healthcare than American humans. What is this world we live in? 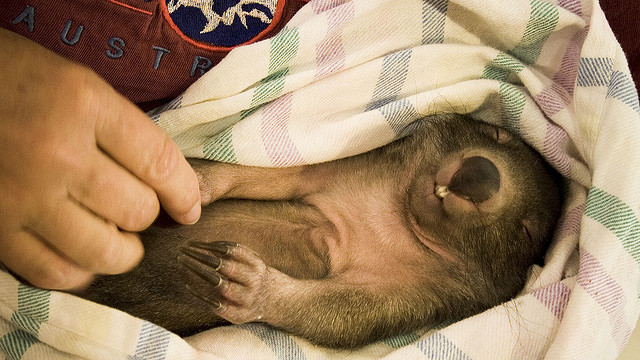 A wombat named Wanda was recently given a new hip to cure her severe arthritis, making her the world’s first bionic wombat and restoring her ability to run, waddle and cuddle.

In the wild, wombats typically live only around five years, so it’s not surprising that at 22, Wanda was suffering from arthritis so crippling she had stopped using the affected leg entirely and required a step to get in and out of her bed (aww! sounds like she’s cripplingly domesticated, too.)

Below is a clip with some of the footage from Wanda the wombat’s surgery (or a scene from Australia’s hit show Wombat O.R.)

Said Jenny Mclellan, veterinarian at the Adelaide Zoo where Wanda lives, “I personally haven’t seen a hip issue like this in a wombat before.”

Specialist surgeon Scott Rose, who was called in for the procedure, explains: “In a dog and a cat it’s pretty easy to do. If you have a wombat with a lot of musculature around their hips, the approach can be a little more challenging.”

News of Wanda’s hip replacement comes just days after yet another duck named Dudley was given what the internet is calling a “bionic” leg, but is in reality is just a pretty cool looking prosthetic made with a 3D printer.

As happy as we are for Dudley and for his 3D-prosthetic predecessor, Buttercup, we hope that whatever quack (sorry, we had to) replaced his itty bitty webbed foot isn’t planning to do more operations. After all, if we keep making lil’ guys like Dudley and Wanda better, stronger, and faster, we’ll be too disarmed by their cuteness to fight back when they inevitably turn against us.

(via kxan, image via Will Keightley)