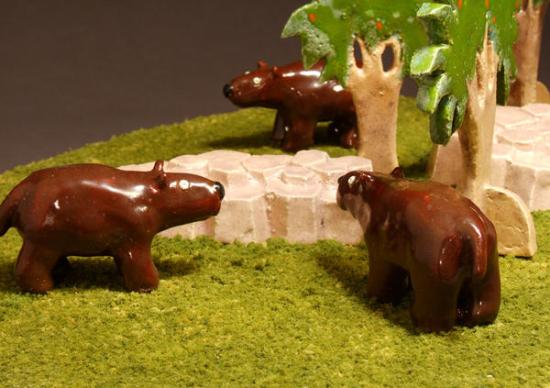 Scientists in Queensland, Australia hit a “paleontologists’ goldmine” when 50 diprotodon fossils were unearthed at the site. Get excited, people. This is a mass grave of giant wombats we’re taking about. So many bones, so much history!

The fossils were dated to be between 100,000 to 200,000 years old, but were remarkably well-preserved. Diprotodons went extinct 46,000 years ago, and were the largest marsupials ever to roam the Earth. One of the fossils in the find was the biggest one ever found, rocking a 28-inch jawbone. They named it Kenny.

The sheer number of fossils found will provide valuable data on the diprotodons and the environment they lived in. Lead scientist Scott Hocknull postulates:

They cemented themselves in a patch of mud. How pleasantly morbid! Fifty gigantic, helpless wombats make for a delectable prehistoric buffet, so it’s no wonder fossils of megalania (a 20ft lizard) and a ginormous pre-historic crocodile were also found at the site. Scientists confirm they snuck a bite because both fossils have shed teeth, a sign of lots of chewing.