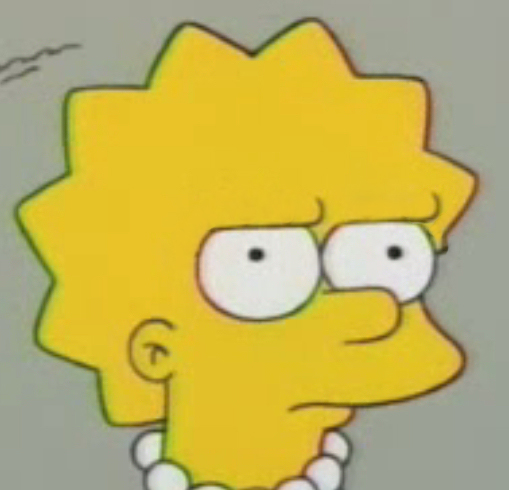 Get ready to put on your own Lisa disapproval faces, this is going to make you angry. A New York woman has confessed to signing up for the online dating service Match.com because she was going into debt and wanted free food the dates would provide her. Going on five dates a week she “made” up to $1200 a month. This is where we go berserk.

The woman, who is now anonymous but given (of all things) the fictional name of the Harry Potter character Minerva McGonagall thanks to the fury her story caused, was perfectly happy to share her story. “Before I barely had enough money to pay for food,” she told Business Insider. “After using Match.com I found I wasn’t going into debt anymore.”

The woman wasn’t going into debt anymore because men were purchasing one meal a day for her. “Her $45k salary was not enough and she needed at least an extra $500 a month and sometimes $1,000 to pay her credit card bills and afford her $1,475 a month apartment in Murray Hill,” writes BI. “Then she discovered Match.com– the perfect site for a broke 23-year-old.”

Her plan involved eating out five nights a week using a rotation of different men from Match and made it a rule not to go out on more than five dates with the same man. She quickly had men buying her not just food but alcohol, even a $200 bottle of champagne on one date.

“[She] went from easily spending $500 a month on dinners alone to having someone else dole out an average of $60-plus per night,” writes BI. “She also stopped eating lunch and opted for a light breakfast to save even more.”

They point out that it cost $50 a month to subscribe to Match but that the amount she saved thanks to the dates made up for it. In her own words, “I mean, a guy buys me three drinks at $15 a pop and that right there made up for my Match fee.”

The woman learned about the advantages of online dating thanks to a roommate and soon her and another rooomate were doing the same. “We made ground rules,” she said, going so far as to make spreadsheets about the men who took them out and what they received from them.

Although it was keeping her out of debt, the woman admitted she wanted to settle down and has herself a steady boyfriend at the moment. “It was exhausting,” she said. “I needed my sleep and I was done playing the game.”

What can I say about this? It’s bad. It’s bad, bad, bad, bad, bad. You may have your own rules when it comes to dating but can we all agree this is reprehensible behavior for someone of any gender? It isn’t stated in the article whether the woman actually had any interest in these men but with a cap on five dates it’s safe to say she wasn’t looking for Mr. Right at all, just a meal ticket. And well, she admitted this was all because of her money problems. It’s tantamount to fraud in my eyes. You can debate what the men where expecting from the date (Match does have a reputation) but the assumption is people are looking for a relationship when they go out on a date.

The story also didn’t delve into what her credit card expenses were. While one person’s frivolity is another person’s necessary coping mechanism (high-speed internet, for example), but one would hope that a person would eliminate their luxuries before they committed a premeditated series of unethical acts. The story did, however, mention she has at least two roommates. I know people living like that in the city and they live just fine without resorting to extorting unsuspecting men out of their hard-earned money. Of course in NYC, it’s entirely possible her portion of the rent is $1,450 (especially in Murray Hill) and not the entirety of it but regardless, this is one of the worst cases of living outside your means I’ve ever seen. It’s also one of the most despicable ways to try and fix your money problems.

I know I’m not the only one who thinks so, right? In fact the article had to be updated after it was posted, “We’ve disabled comments on this post because they were getting out of control. We have also changed the name of the woman in the story because people were taking it waaaay too seriously.” What is there about this to NOT take seriously? Not only is it pretty reprehensible behavior for anyone, it’s also an example of knowingly participating in one of the worst stereotypes misogynists hold on to about women (that we are money grubbing, gold digging leeches), which hurts everyone and the fact that she saw this as a great idea is horrendous. Men may be nice enough and willing to pay for you on dates but you shouldn’t let them just so you can make the rent and share their wealth with your friends.