How Not to Market Science to Girls | The Mary Sue

Gee, Thanks: Marketing Science to Girls by Reinforcing Gender Stereotypes 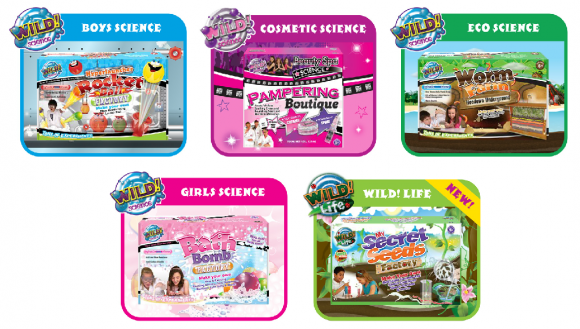 Okay, what’s wrong with this picture? If you guessed the “boys science” and “girls science” thing, then yes — that is what this post is going to be about. Oh, educational toy manufacturers! When will you get it through your smarty-pants heads that getting girls to become interested in science does not have to entail convincing them that “their” science has to be “feminine”? It’s not even the pink, you guys. It’s the segregation. Who’s to say that girls don’t want to take part in “boy science”? My heart weeps for the girls who want to make slime and the boys who want to make crystals.

The manufacturers in question are WILD! Science, an Australian company that has its heart in the right place, but has chosen an age-old — read: antiquated — way to market science to children. Look, it’s awesome that they’re going out of their way to market science to girls. However, the point of marketing science to girls is to make them feel like it’s not something that’s masculine or feminine, it’s just something else that they can do as well as boys, maybe even better than some of them. But this is not the way to accomplish that at all.

First, let’s deal with the pink thing. It’s high time we stop assuming that pink = girly or vice versa. Some humans of the male persuasion might actually like pink, as does Phil Plait at Bad Astronomy. I mean, his iPad cover is pink. Men wear pink shirts, ties, and other articles of clothing, and not just for breast cancer awareness. But on the flip side, not all female persons like pink.

Now, on to the science. Okay, there is a separate kit for “Cosmetic Science.” Fine. Did it have to be pink? Probably not. Could have been a sleek black or silver, maybe some awesome neon colors. The only gender non-neutral part of it is the pink packaging, because like it or not, pink still equals girly. The kit itself is a “cleansing boutique,” about hair and skin care, keeping in mind pH balance, cleanliness, and … “beautifully colorful ingredients.” It was going so well! Until the emphasis on beauty.

On to the boys and girls kits. Here are the “boys kits”:

And the “girls kits” (of which there are actually more):

Okay, so going by this, the boys are allowed to be “hyper,” “perilous,” “jokey,” physicists and chemists, “spooky,” and “weird.” Girls get to be “amazing,” “beautiful,” “luxurious,” “mystic,” “magical,” “perfect,” and also smell nice and play with snow. Snakes and snails and puppy dogs’ tails vs. sugar and spice and everything nice. I mean, even the slime has to be beautiful?

As I said before, WILD! Science’s heart is in the right place. It wants girls to take part in activities that are scientific. But putting such an emphasis on the “pretty, pretty princess” aspect of science, labeling it as “science for girls” while labeling other kits with no emphasis on appearance as “science for boys” is sending the wrong message entirely. Will some girls be interested in using the “girl kits”? Sure! Will some ignore the “boys” label and still use the “boys kits”? Sure! HOWEVER: Will any boys be interested in using the “girls kits” if they are “for girls”? They might be. But they might be too embarrassed to use them. Even the boy who wants to make snow flakes and bath bombs.