Lady who Drove a Train into a House, I am Impressed 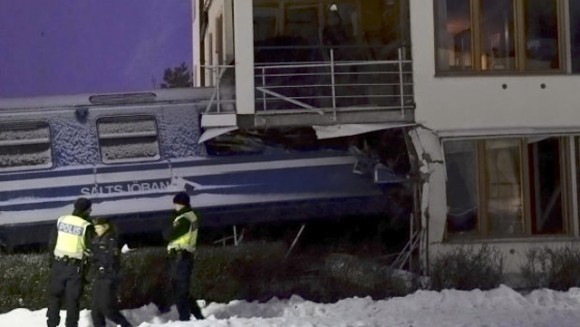 We frequently find ourselves impressed by the accomplishments of women around the world here. Whether it’s Sunita Williams being a total boss in space, the consistently awesome winners of Google’s Science Fair, or Anne Hathaway diverting a creepy question. But it’s safe to say this is a slightly different kind of impressed. Less… in awe, and more… grudgingly respectful?

Anyway, a Swedish cleaning lady drove a train into an apartment building and no one was injured.

In a suburb of Stockholm this week, a twenty-three year old member of the train operator’s cleaning staff took a locomotive for a brief joyride of about a mile, at which point I assume it reached a turn for which it was traveling too fast because it jumped its tracks, coasted another thirty yards, and then embedded itself in a nearby apartment building. Nobody was injured.

According to CBS, “The motives of the woman, who worked for a company contracted to carry out cleaning for the train operator, were not immediately clear.” In fact, nobody’s really sure how she got the keys to the train, or how she figured out how to use it, although, hilariously, a spokesperson for the train operator admitted that it’s not really that hard. “Generally speaking that’s possible even if you’re not a train driver,” he said. “You can read about it on the Internet, or observe how others do it.” He also noted that he’s only heard good things about her.

So, Swedish lady who drove a train into a building with no casualties, my hat is off to you. Not because you figured out how to drive a train, or because you lived the dream of millions upon millions of five year old children, but because you now have positively the greatest “Thing I did because I if I didn’t I would regret it for the rest of my life” story.

Good luck on your job search.