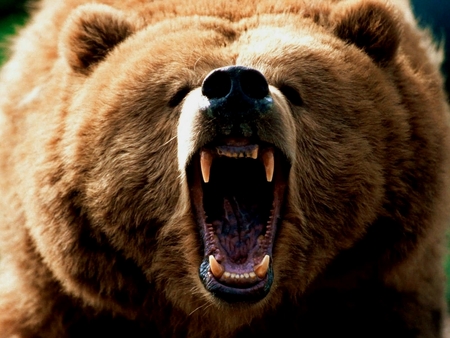 A 25-year old Missouri woman named Erin Bolster was leading a group of riders on horseback one day when they came across a bear. A grizzly bear. Chasing a deer that sped right past the group. All the horses, including Bolster’s — a horse named Tonk — ran away from the bear, but one horse, Scout, carrying an eight-year-old boy, ran into the woods instead. The bear started chasing Scout and the boy — so Bolster and Tonk chased the bear. 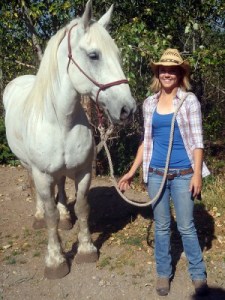 You might recall that earlier this month, we covered a story about a woman who punched a bear in the face. While Bolster did not have to get quite that close to chase this particular bear away, it’s still a pretty heroic move to dash towards a bear that is chasing after potential prey.

Bolster says that bears in the area are not that unusual, and they are tracked in the Flathead National Forest where this excursion was taking place. But when a speedy little white-tailed deer burst out of the brush and right past the riders, the horses’ natural instinct to get the hell out of there kicked in first and they fled. And one horse fled in a different direction and into the woods — with a terrified eight-year-old. The bear quickly forgot about the deer and chased the horse. Even scarier, the boy’s father, a trained rider, couldn’t get his horse to change directions (towards the bear) and watched helplessly as a bear chased his son into the woods.

When she found the boy and his horse in the woods, Bolster said he had held onto the horse for dear life, preventing himself from being thrown from a more rambunctious ride than originally planned. And that’s when she stood between the boy and the bear.

“I bent down, screamed and yelled, but the bear was growling and snarling and staying very focused on Scout.

“As it tried to circle back toward Scout, I realized I had to get Tonk to square off and face the bear. We had to get the bear to acknowledge us.

“We did. We got its attention — and the bear charged.

“So I charged at the bear.”

Then the bear tried for the boy again — a third time — after he fell off his horse. So Bolster charged the bear again, and the bear finally left them alone. She got the boy onto Tonk and took the other horse back to the group.

“He was fine, and I got my biggest tip of the season,” Bolster said. “My biggest hope is that the boy isn’t discouraged from riding. This was a one-in-a-million event.”

Bolster, a world-class rider who graduated high school at 16, says that no other horse would have done what Tonk did that day, so she bought him. She also says that in this kind of situation, your horse is the best protection from bears, as long as you can stay on.

So, there you have it. Another installment of Woman Vs. Bear. You know, this is just one more reason that Stephen Colbert should be geek friends with us: women can protect him from bears.

(The Missoulian via Jezebel)