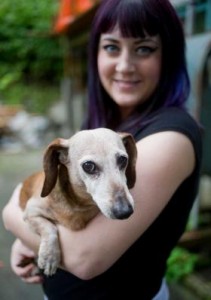 Don’t you hate it when you’re hanging out at home (in Alaska) and all of a sudden, you see a bear carrying your dachshund in its mouth like a salmon? That is exactly what happened to Brooke Collins, who did exactly what any self-respecting dog owner would do — she punched that bear in the face. What? You thought only sharks hated being punched in the face? Oh, no, Virginia. Bears dislike being punched in the face. But not enough to punch you back. Because this one left Collins and both her dogs unscathed and ran away back to the forest where he was mostly likely mocked relentlessly by all his bear friends.

There is honestly not much more to the story, except to say that it’s one of the most hilarious headlines to read if a) you are not Brooke Collins or one of her dogs or b) far, far away from the bear population. However, Collins, who lives in Juneau, Alaska with her boyfriend Regan O’Toole (who witnessed the bear attack — that is, the attacks both by and on the bear), certainly deserves some recognition for the intestinal fortitude exhibited in the name of her dog, the dachshund Fudge. (She also has a pomeranian named Toki, who was not nearly kidnapped by a bear and just stood by, watching in fluffy, fluffy horror.) There was no question about what she had to do when she saw a bear making off with Fudge. She had to save Fudge. By punching that bear in the face.

“It was all so fast. All I could think about was my dog was going to die,” said Collins.

“It was a stupid thing but I couldn’t help it,” she said. “I know you’re not supposed to do that but I didn’t want my dog to be killed.”

The bear, which was described as “very large,” did not cause serious harm to Fudge, except for giving him a huge fright, and Collins has said she will be more cautious of bears in the future, but will probably not punch another one in the face.

(Juneau Empire via Best Week Ever)