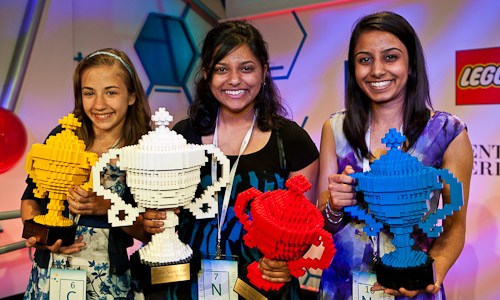 On July 11th, the top fifteen contestants of the first annual Google Science Fair all gathered at Google’s headquarters to compete. In all three age categories, it was intelligent young women who took home the top prizes. Lauren Hodge (Age group 13-14), Naomi Shah (Age group 15-16), and Shree Bose (Age group 17-18) all took home trophies for their entries, and Bose’s was for a breakthrough in the treatment of ovarian cancer.

Google made this statement about the girls:

The unifying elements of all three young women were their intellectual curiosity, their tenaciousness and their ambition to use science to find solutions to big problems. They examined complex problems and found both simple solutions that can be implemented by the general public—like changing your cooking habits or removing toxins from your home—as well as more complex solutions that can be addressed in labs by doctors and researchers, such as Shree’s groundbreaking discovery, which could have wider implications for cancer research.

Bose, who took home the grand prize, discovered a way to combat resistance to certain chemotherapy drugs and improve ovarian cancer treatments for women. Shah worked to prove that changes in indoor air quality can reduce reliance on asthma medications; Hodge studied the effects different marinades had on levels of harmful carcinogens in grilled chicken. All three are proof that women in the sciences can kick ass and take names.

As part of the grand prize, Shree received “a $50,000 scholarship, a trip to the Galápagos Islands with a National Geographic Explorer and aninternship at CERN,” yeah, that’s right, CERN, while Lauren and Naomi received $25,000 each in scholarship money and internships at Google and LEGO.