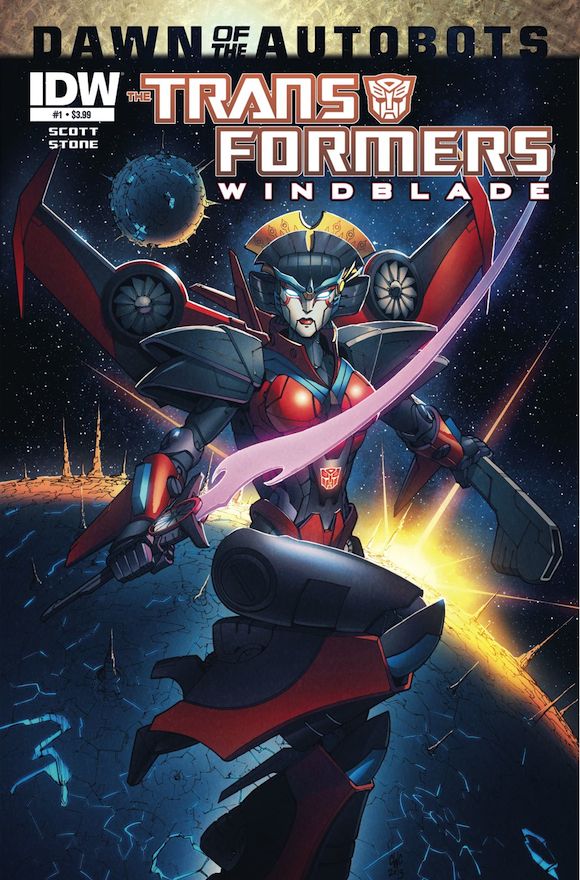 A couple weeks back we put up a short recap of the “controversy” around fan-made TRANSFORMERS, Windblade, that’s debuting in her own 4 part comic series, along with her own Hasbro toy. That article was meant to be the first half of a piece where we got to interview Windblade’s author, Mairghread Scott, but the latter half of that was unavoidably delayed for a bit. So it was much to my delight to receive that interview back today, and OH BOY does Ms. Scott deliver! Want to know more about Windblade, the bots appearing alongside her, and her place in the larger TRANSFORMERS canon? Well wait no longer, friends!

As a double-plus bonus for the being patient with the wait, IDW and Ms Scott have given us several previews of Windblade supporting characters, including Blurr, Chromia, and Starscream!

Jaydot: The TFWiki entry about Windblade is pretty sparse. We know she’s got a “fancy sword” and turns into a jet, and there’s almost literally no other info about her. Without getting into too much background detail, which I understand might be spoilery, can you elaborate at all on who/what Windblade is?

Mairghread: To be fair, beyond being a jet and a sword fighter I started with a pretty blank slate when I developed Windblade, so don’t fault the wiki for that one. The most important thing for me when constructing Windblade was to make her a fully three-dimensional (read: flawed) character, so if I had to pick one word to describe her I would say that Windblade is trying. She’s an optimistic, hard-working Transformers character who is genuinely interested in helping others, but she’s also been dropped in the aftermath of a millennia (for real) long war that she was not really part of, so while she’s a very competent character, she’s way behind the curve when it comes to knowing who’s who and what’s what on Cybertron. This actually makes Transfomers: Windblade a really good starting point for new readers because almost everything on Cybertron is as new to her as it is to someone just entering the brand.

What’ll be the overall tone of the book? Transformers can run the gamut from very kid-friendly to very mature (although even Transformers Prime had its extremely dark moments, see the whole Silas storyline, for example). While I have no doubt Windblade will have its emotionally impactful moments, are you aiming overall for something lighter or more fun, or is this a much more serious endeavor?

Transformers: Windblade is, at its core, a story about hope: who has it, who doesn’t, what does it cost and when is it worth (and not worth) that price. So you should expect a story that runs the entire emotional gamut. That said, Transformers: Windblade will definitely be fast-paced and fun because Transformers as a brand is so fast-paced and fun, but hope in the hands of someone like Starscream can be a very dangerous thing and Windblade, who is so centered around the idea of hope, is going to learn that the hard way.

Despite being a fan-made robot, there is some controversy over the idea of gender in Transformers in general. Some would make the argument that there’s no need for gender when you’re dealing with giant robots, that the binary falls more along the lines of robot form/vehicle form (or beast form), which nominally makes sense, but it’s pretty plain to see that most transformers are coded as male, one way or another. However, they get to be male without any justification – they just are, as if that’s the default. How much do you plan to address Windblade presenting as female, or do you plan to let her just “be” female without justification, much as the male Transformers are?

More female inclusion within the brand is a great thing and Windblade’s “female-ness” is unusual to many of our characters because of past continuity, so we will talk about it somewhat. But, on the flip side, I think the best part about female transformers is the fact that they aren’t defined by their sex/gender “in story” and I’m not interested in changing that. Windblade is a jet, Chromia is a bodyguard, and while the characters in story are aware that they both use the pronoun “she,” it’s far from the most important thing about them. When your world includes a hovering robot shark, people with two heads and your species can be anywhere from knee-high to planet-big, you tend to take a pretty broad view on “diversity.”

A question I scooped from an informal nosing around on twitter, will Windblade be a forged bot or cold-constructed, and will her origin be addressed in the Windblade comic?

Ahahah ok fine. Well, in that case, what’s the #1 (or #1 through #5) thing you want people to know about WINDBLADE? Either the comic as a whole or the character.

When it comes to the comic, you should be reading it.

If you’ve loved Hasbro and IDW’s Transformers comics for years, you should read it: Sarah and I have really tried to push the envelope in both storytelling, artistic style and that wonderful point where they meet. We’re going to open whole new worlds for you both in-story and on the page and you are not going to want to miss it.

If you’ve never read Transformers, you should read it. Transformers: Windblade is a perfect jumping on point and designed to show off all the best (okay, all my favorite) parts of this brand: fantastic characters, imaginative landscapes, awesome fight scenes and, yes, even humor.

And if you’re an impulse buyer, you can order issue 1 from your local comic store right now: FEB140337 E  TRANSFORMERS WINDBLADE #1 (OF 4) gets you the Casey Coller cover.