It all started innocently enough. Hasbro, who owns the Transformers license, held a fan-build bot poll in 2013 in anticipation of Transformer’s 30th anniversary in 2014. The final chosen bot got a 4 book comic run and its own toy, all chosen by the fans for the fans. Thus was Windblade born, but with just one problem…

Windblade is a female bot.

Ok, so that’s not actually a problem. Unless, well, unless you have a problem with women, in which case there may be an internet shitstorm of embarrassing proportions. Which, much to no one’s surprise here I’d imagine, was exactly what we got. There were cries of unnecessary gender politics, because aren’t Transformers gender neutral? They’re robots after all. They don’t have sex (copious fanfic notwithstanding), they don’t need sexes. They are forged or constructed cold, whole. There are no baby Transformers, because Transformers don’t make babies, so why should Windblade be female just because it was a popular option on some fan poll?

If you could see the face I’m making right now. But you cannot, so let me use my words to elaborate. Transformers are effectively male. They do not have genitals or chromosomes or physical characteristics of men, but gender is often only tangentially related to your actual bits. Transformers who are not specifically female Transformers behave in ways our society reads as inherently male.  So arguing that a female Transformer doesn’t make sense because Transformers don’t have gender ends like this (courtesy Shortpacked!): 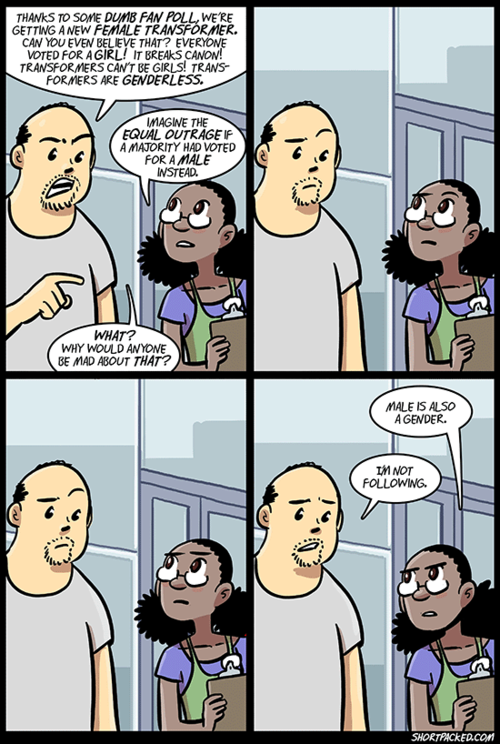 Personally, I’m super excited for both the Windblade comics and the new toy, and will be buying the crap out of both. Not just to make some grand sweeping statement about how women belong in Transformers as much as anyone (which, given it was a fan poll that made her female in the first place, seems like it should be obvious that we’re already here), but because I want to see more of myself in the Transformers fandom. I love Optimus Prime like a gentle but stern father, love Bumblebee like a sweet little brother, but I want to see more characters that I love because in them I see myself. Representation matters.

If you want more information on Windblade, the wiki remains frustratingly sparse, but the writer of the comics, Mairghread Scott, did take the time to answer some questions here. If you want a little clarification on Ms. Scott’s position on female Transformers in general, she did write a few comments about Arcee’s canonical origin in the IDW Transformers comics (the version of Transformers canon in which Windblade will be introduced), which may give you a clear idea of how she handles gender with regards to Transformers. Her answer naturally engendered a shitstorm of their own, but one that is, again, somewhat embarrassing to read through.

And stay tuned into the Mary Sue as well, because we have an interview with Scott herself about the upcoming Windblade comic!