William Shatner Is Making A Xena Documentary, Starts By Calling Its Fans “Needy” 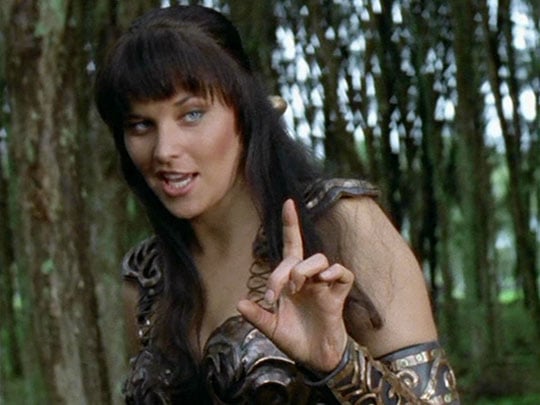 I’m a die-hard Trekker but that doesn’t mean I have to love everyone who’s ever acting in the long-running saga. For every George Takei or Wil Wheaton, there’s a William Shatner. The Star Trek actor has certainly made a niche for himself in recent years acting as the spokesperson for Priceline and performing in other comedic offerings but he’s also turning into a documentarian. Previously he directed The Captains, a film more suited to his expertise, and a Trek fan documentary called Get a Life, but now he’s set his sights on fans of Xena: Warrior Princess and it’s safe to say he’s out of his depth.

I don’t think I’d be too far off to say Xena fans come pretty close to the obsession level of Trekkers. Xena may not have had the shelf life of the Star Trek franchise but the Hercules: The Legendary Journeys spin-off left a lasting impression.

Much like Star Trek, Xena conventions are still held throughout the year and in a recent interview with Mania.com, Shatner revealed that’s where he’s headed next.

I am a news-oholic. I love watching the news. I love watching the stories. I love the human history that is exposed on CNN, CSPAN, and all that type of thing. I love the humanity behind what is going on and the discovery of it. I love the concept of making documentaries, but what would I make a documentary of that people were going to buy? So, faced with that, in the market place and the curiosity, I was able to combine the first half and make a documentary about Star Trek. Now, they see I can make a film. My ideas are being met with more approvals. I’ve got a couple of docs in the pipeline. For example, I went to a Xena Convention. Who goes to a Xena Convention? People in need. People who are so in need that they cling to each other because of the mutuality of what they are. It is a love fest. It is an embracing of like-minded people. That’s what I discovered. I am editing it right now and it is a fascinating documentary.

I’d probably agree that Xena conventions are a “love fest.” Even though I’ve never attended one (but totally would), everything I’ve seen from them points in that direction but Shatner is basically calling out attendees as pathetic. “So in need that they cling to each other?” I mean, really? How about they love the show and love hanging out with other people who feel the same? I think that goes for a lot of us in fandom.

Shatner came to a much more intelligent conclusion from his Trek book/documentary.

For the book I asked myself that question, who comes to Comic Con? Who comes to a Star Trek Convention? I did my due diligence by doing interviews and I discovered some fascinating characters, that are in the book, and concluded that they are there to see each other. Instead of coming to see the actors, which all the actors thought they were doing. They were coming to renew old friendships. Okay, well that’s an interesting conclusion and that was the conclusion of the book. When I decided to try again, maybe by the dent of being older or by luck I came across other answers as to why people dress up and come to conventions. And why they are the potential source of jeering. The conclusion that I come to in the documentary are cultural, sociological, and are on a far deeper basis then the fun they are having by dressing up… or by putting on a Klingon Omelette.

So Trek fans = friendly cosplayers while Xena fans = needy loners. What do you think of Shatner’s Xena fan assumptions?