Will Ferrell as Ron Burgundy Announces Anchorman Sequel, Most of Original Team and Cast Return 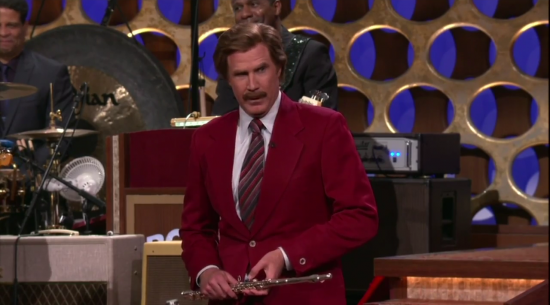 On Conan last night, Will Ferrell appeared as Anchorman’s Ron Burgundy, flute and all, and announced that Anchorman will be getting a sequel. Though fans of film, comedy, and not milking a cow that gave you the perfect amount of milk might feel that the movie didn’t need a sequel, most of the original team is already slated to return, so the movie probably has a good chance at providing some good ol’ newsroom entertainment value.

Along with Will Ferrel, Paul Rudd, Steve Carrell, and David Koechner are set to return, which would reform the main, pre-Applegate news team. Director Adam McKay and producer Judd Apatow are also tacked onto the project, so really, if you liked the original, the sequel should have a pretty similar feel.

There’s no word on Christina Applegate as of yet, but the Associated Press confirms Paul Rudd, Steve Carrell, Adam McKay, and Judd Apatow, while Deadline confirms David Koechner is on board. A lot can happen between the announcement of the movie and its actual casting and release, so keep your fingers crossed that the original cast can return.

Though Anchorman was eight years ago and most of the cast and production team have moved on to newer projects and grew their style of comedy since the original, one can only assume that people as talented as the ones involved in the original would be able to drum up some of that old newsroom humor.

In a perfect world, I’d have the sequel center around the rival news gangs, as the celebrity cameos were not only hilarious, but the thought of a post-apocalyptic world that is sectored off into territories run by rival news teams seems rather appealing.