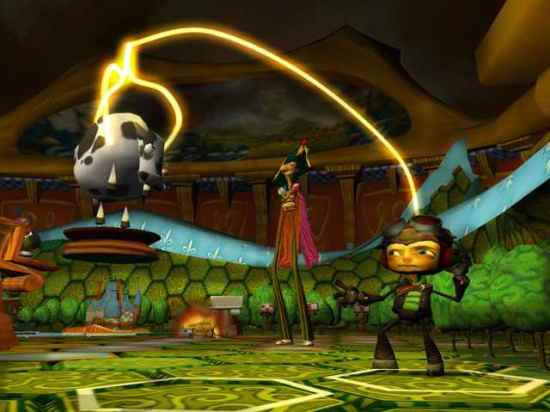 Tim Schafer’s Psychonauts is one of the best video games ever made. It’s that simple. It has its flaws, sure, but everything has flaws, and the ones in Psychonauts are so minute that they’re extremely easy to overlook. Similar to how good television gets canceled in season one or two, no one bought Psychonauts when it first released. After dropping in price over the years and releasing on other platforms (like Steam), Psychonauts started making money. Mastermind Tim Schafer never let the initial abysmal sales get to him (which would make sense, considering the critical acclaim the game continues to receive, even to this day) and revealed to Digital Spy the other day that he pitched a sequel to the game to publishers “several times,” but no one would bite. “I’d love to do that game,” he said, “but I’d have to convince someone to just give me a few million dollars, that’s all.” In a perfect storm of beloved gaming icons, Notch got wind of Schafer’s statement, and tweeted that he’d fund the making of Psychonauts 2. Wat.

One may initially assume that Notch was being hopeful, but he then followed up the initial tweet with one where he confirmed that he’s serious about making everyone’s Psychonauts 2 dreams come true. If anyone has a bunch of money lying around to fund things, it is certainly Markus Persson, creator of indie phenomenon Minecraft and center of one of the most exciting gaming success stories in recent memory.

Interestingly, Notch’s company, Mojang, has already dipped its hand into the publishing world, as it published third party gameCobalt, so they do have some publisher chops. It sure would be great for both Mojang, fans, and Double Fine (Tim Schafer’s studio) if Mojang took on a sequel to one of the most beloved (and best!) video games ever made as one of their fledgling publishing projects.

Tim Schafer has always wanted to do Psychonauts 2, the statement he made to Digital Spy wasn’t the first time he has said he wanted to make the sequel — the first game even sets up that Raz and company aren’t finished having adventures. So far, the only thing that has transpired in this story is Notch tweeting that he’d fund the game. This isn’t any kind of contract, and Tim Schafer hasn’t publicly responded to Notch as of yet, but one can only assume the news will catch his eye soon enough if it hasn’t already.

Steve Dengler, Double Fine financier, responded to Notch with a tweet by saying that he’s in, then tweeted at Notch and Tim Schafer saying that they should move this conversation offline, to something more appropriate than Twitter. It certainly looks as though Notch and Double Fine are looking to make our video game dreams come true.

We’ll update whenever there is anything to update, especially considering this is pretty much the best news.