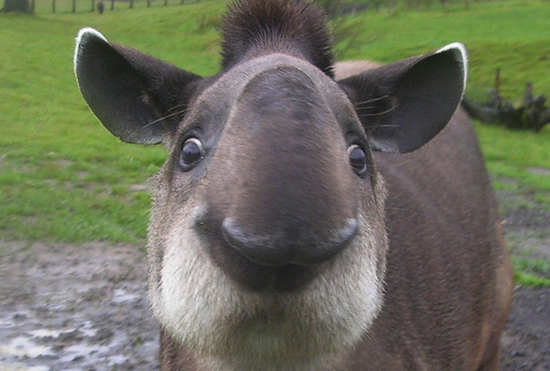 Tapirs may lovable in that so-ugly-they’re-adorable kind of way, but the fact that they’re cute as the dickens hasn’t helped them avoid a spot on the endangered species list. Due to unsustainable hunting, habitat loss, and low reproductive rates, environmentalists have been pushing for tapir conservation efforts and awareness for years. Even though the tapirs’ situation appears to be a dire one, there may be a glimmer of hope for the bizarre creatures after all. A team of scientists from the Wildlife Conservation Society have recently released their report in the journal Integrative Zoology on a thriving lowland tapir population on the Peru-Bolivia Border. Playing host to an estimated 145,000 of these critters, mankind may have just stumbled upon a veritable Garden of Eden — as envisioned by the tapir, of course.

The scientists involved in the research on the tapirs were Robert Wallace, Guido Ayala, and Maria Viscara of the WCS’s Greater Madidi-Tambopata Landscape Program. As the program’s name implies, the tapir population was located within the Madidi and Tambopata National Parks of Bolivia and Peru, respectively — the former of which was founded in 1995 to protect local wildlife like tapirs from hunters and deforestation resulting from environmentally irresponsible logging.

Utilizing a system of camera traps, and knowledge gathered from interviewing guards and hunters in the region, researchers were able to calculate a close approximation of the number of lowland tapirs residing in the region. Photographs from the camera traps showed that tapirs living within the borders of government-protected areas experienced denser populations as opposed to those that weren’t, suggesting this recovery would not have been achieved had the Madidi National Park not been sanctioned.

The Greater Madidi-Tambopata Landscape Conservation Program is currently working alongside the governments of Bolivia and Peru to maintain the parks and divert any construction, logging, and excessive hunting that would prove detrimental to lowland tapir reproduction. Because if anything else, our children, and their children’s children, cannot be deprived the enchantment of seeing an animal that looks like a cross between an elephant and a pig.