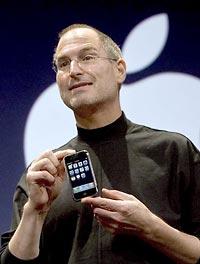 Steve Jobs made the black turtleneck and 501 jeans an instantly noticeable, iconic form of dress, becoming widespread enough to the point where the outfit is one of the first Jobs-related items that gets parodied when doing a bit. Following the announcement of Jobs’ death, sales of the famous turtleneck actually significantly increased. Though the outfit became recognizable as a representation of Jobs, and to a lesser extent, Apple itself, its inception wasn’t all too celebrated, and was initially rejected by Apple.

In a book due to release in a couple of weeks, entitled Steve Jobs, biographer Walter Isaacson explains the turtleneck’s origins. In the 1980s, Jobs spoke with Sony chairman Akio Morita about why everyone in the factories wore uniforms, to which Mortia explained that after the war, people didn’t have enough clothes so Sony had to give them something to wear. Eventually, the uniforms evolved into their own styles, and created a kind of bond amongst employees. Jobs wanted Apple employees to have a similar bond, so he contacted the designer of the Sony uniforms, Issey Miyake, and asked Miyake to make a vest for Apple employees. Jobs presented the vest, and Apple employees were not fond of it. “Oh man, did I get booed off the stage. Everybody hated the idea.” He grew to enjoy the idea of having a uniform for himself, however, both for the convenience of having a daily go-to outfit, and because it conveyed a signature style.

“So I asked Issey to make me some of his black turtlenecks that I liked, and he made me like a hundred of them.”

On a somewhat melancholic note in retrospect, Isaacson notes that Jobs noticed the surprise on Isaacson’s face when he told the story, so he showed all of the outfits sitting inside his closet, saying,

“That’s what I wear. I have enough to last for the rest of my life.”