Take Your Doctor Who Knowledge to the Next Level With Our Who-Ology: The Official Miscellany Giveaway

Who-Ology is everything a Doctor Who fan could want to know, and we're giving away a few copies. 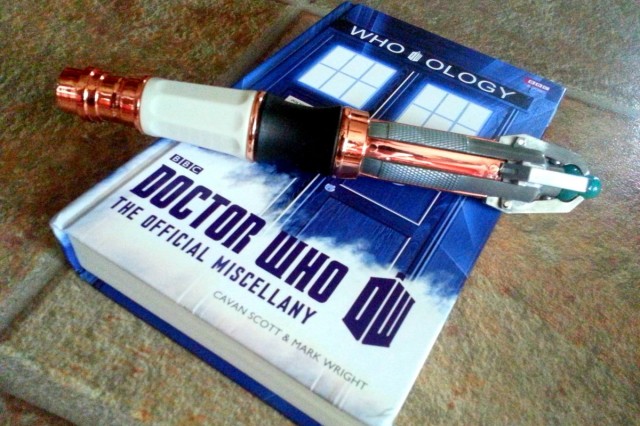 Today BBC Books has released a complete compendium of Doctor Who knowledge titled Who-Ology: The Official Miscellany here in the United States. You can rush right out and buy it — or you can win one of three copies we have to give away! We even have an exclusive excerpt from the book just for our readers! Sorry about all the exclamation points. I just really like Doctor Who and giving stuff away.

Who-Ology gets into some real deep detail about all thing Doctor Who. There’s a complete — and I mean complete — timeline of the history of the show, the first and last words of all the Doctors, and so much more. There’s information about the Doctor’s enemies, his companions, his sonic screwdriver, and more about the TARDIS than you ever wanted to know — including everywhere it’s ever been.

One section I found particularly interesting was the one about K-9, because I love K-9. K-9 is the best. You should all know more about K-9, so here’s an exclusive look at the section of Who-Ology that covers the different actors who voiced the Doctor’s little tin dog.

A RADA graduate, John Leeson holds the distinction of being the original Bungle the bear in Rainbow. In the late 1970s, Leeson bumped into an old friend, director Derrick Goodwin, who subsequently asked him to play a couple of voices in The Invisible Enemy – namely an alien virus and K-9. Leeson temporarily left the series after The Armageddon Factor and was replaced by David Brierley. After an accident in rehearsal ended his ballet-dancing career, Brierley had moved into stage managing, picking up acting roles as he transferred from theatre to theatre. His TV work included three separate parts in Coronation Street, most notably as a friend of Ken Barlow in episodes 6 to 14 of the legendary soap opera.

Brierley voiced K-9 for four stories, including the untelevised Shada, before Leeson was persuaded to return for K-9’s imminent departure. Brierley went on to appear in Threads, Juliet Bravo, The Tripods and Howard’s Way before passing away in June 2008, while Leeson made appearances in Minder, Doctors and ChuckleVision. He returned to Doctor Who in 2006 for School Reunion, reprising his role in the subsequent spin-off series The Sarah Jane Adventures, and again in Australian TV’s K9 series.

Given to the Doctor by his creator Professor Marius, mobile computer K-9 travelled on board the TARDIS until he opted to remain on Gallifrey with Leela. The Doctor had obviously been preparing for the possibility that his robot dog might leave – he already had a box containing the components for K-9 Mark II.

Back in April we teamed up with BBC Books to giveaway copies of their 50th Anniversary novel re-releases. We had so much fun with it, we’ve teamed up again to give away three copies of Who-Ology: The Official Miscellany. What do you have to do to win one of the three copies? It’s simple:

3) That’s it! If you do that, you’ve entered into the contest.

Even if you don’t win, fans of Doctor Who will probably want to grab this book. It has everything you could want to know about Doctor Who except for who’s replacing Matt Smith.

Precise details: This contest is open internationally, with only one entry per person. The contest will end Tuesday, June 18th, 2013, at 2PM ET. The winner will be chosen at random based on valid entries, and they’ll be notified shortly after the contest ends by reply to their entry. Good luck!

(image my own, Sonic Screwdriver not included in contest. It’s my TV remote.)