Dems Need Black Voters to Stop Roy Moore, so Why the Focus on White Female Voters? 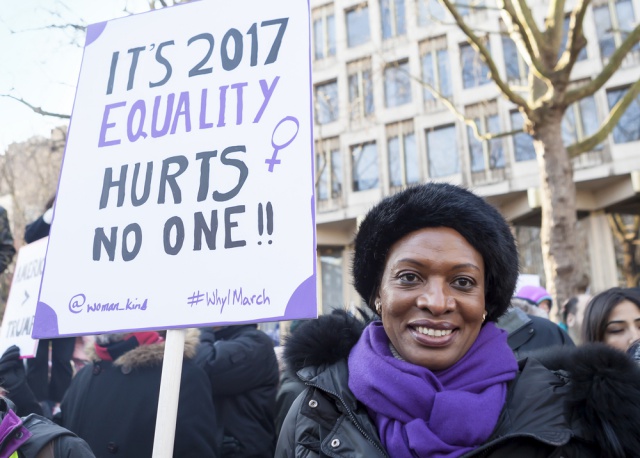 One of the most sobering realities after the 2016 election was the polls showing who was responsible for the election of that man. 53% of white women voted for Donald J. Trump to be president (according to the New York Times), despite his sexism, despite the fact that he is accused by multiple women of sexual harassment, and despite the fact that he said he believed women who have abortions should be punished.

“Ninety-four percent of black women voted for Hillary Clinton” and  “Sixty-eight percent of Latina women did so,” as well. Despite the fact that feminism and many female-focused mediums aim a majority of their attention towards white female voters, it seems that may not be the best use of resources. Now, with the Roy Moore/Doug Jones Alabama election less than a week away, white women once again have been asked to side with either an accused sexual predator or a Democrat.

CNN reported today that “the Trump era [sic] is widening the divide between the political preferences of white-collar and blue-collar white women.” It is now class, not gender, that is encouraging how women vote, and even though Democrats overall pull women better than Republicans, it is no longer a guarantee, and we have for years ignored the deep divide growing between different classes of women.

“Republicans have consistently run more strongly among white women without degrees than their counterparts with advanced education. Historically, fewer blue- than white-collar women have been moved by Democratic arguments on social issues — either because they take more conservative positions on questions such as abortion or don’t prioritize those concerns as much. Conversely, blue-collar white women, who generally are among the most economically strained groups in the electorate, have also been more receptive than their white-collar counterparts to Republican arguments for cutting taxes and federal spending. President Barack Obama carried only about two-fifths of non-college white women in each of his two victories, and those women gave the GOP huge margins during its midterm landslides in 2010 and 2014.”

According to the most recent polling on Trump’s approval rating amongst non-college-educated women, he stood at just 46%, and “in a recent national Quinnipiac Poll only 54% said they believed Trump is fit to serve as president.”

Sexual misconduct was supposed to be the issue that brought down Moore, which now in retrospect was definitely wishful thinking, considering the country elected one man despite that issue, and another is sitting on the Supreme Court. It has not worked to turn blue-collar white women against Moore, because as one Democrat in Alabama put it, “It’s not a matter that some of these non-college-educated white women don’t think Moore did this, but there is a big part of them that don’t think it’s a big deal compared to what they deal with.”

The discussion around sexual harassment has been hugely about upper-level jobs and celebrities, and while we have made sure to mention that these things happen access every sector of business, the media has focused on these elite people, which could alienate those blue-collar women.

Now, the women who have accused Moore are not famous, and some of them are conservative women, but with issues like abortion being at the forefront of women’s minds, it may seem like sexual harassment will not matter as much to some of the women voters who are, at the moment, pro-Moore according to The Washington Post. 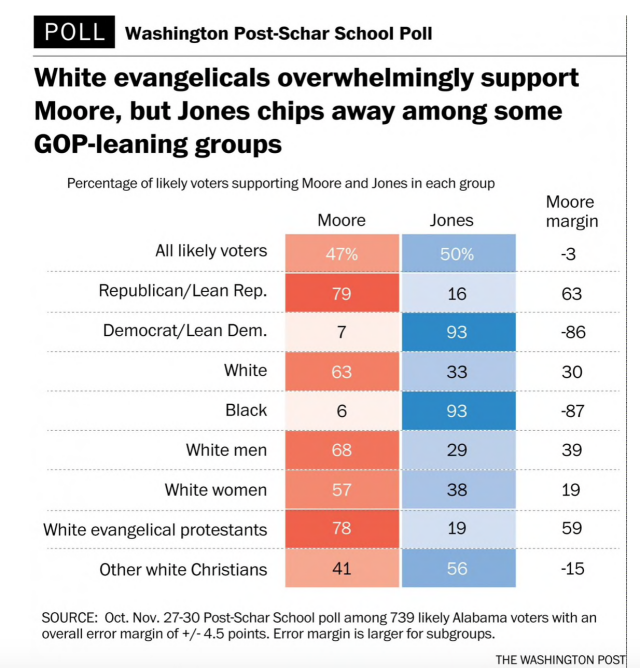 After the 2016 election, I felt betrayed by white women because I had assumed that white men would vote for Trump, but I had also assumed that women stood in solidarity against such overt and extreme sexism. Earlier that election morning, I saw footage of white women putting stickers on Susan B. Anthony’s grave and I remember feeling like “we got this.”

The next day was a sobering reminder that, for years, white women, even amongst progressive movements, have put their race before others, assuming that by focusing solely on gender discrimination, it would bring all women together. As a black woman, I did my part, and many women of color did—as did 47% of white women. We have spent time since the election trying to reach out to the rural and poor working-class white people who stood by Trump to try to convince them that he is a false prophet for the poor.

Sarah Silverman has been doing this with her show, I Love You America, on Hulu. In the premiere episode, she went to Chalmette, LA to speak with a family about why they voted for Trump. The one who pushed the family to do so was Brandy, a 26-year-old white woman who does say nice things about LGBT people, but also says that Obama wasn’t really born here, that he “took what it means to be an American out of America,” and that he just handed out money to people who do not work and have not earned it. Yet, they have voted for a man who is literally about to get his party to pass a tax bill that allows people who do not work for a living to not be taxed on money they inherit. Oh, and the whole family is on Medicaid, which Republicans want to cut, and Brandy is a student and gets her health care from … the government.

We have to realize that we may not be able to change the opinions and values of white rural women in this election, and while we should certainly be working to educate people across the socio-economic spectrum, the Dems also need to start making sure they are reaching the people who are looking to vote for them: people of color.
Right now, Doug Jones needs to energize the black voting base, which shouldn’t be too hard because he PROSECUTED A MEMBER OF THE KKK FOR THE BIRMINGHAM CHURCH BOMBING. Jones should be in black communities letting them know that he is working towards their best interest and has done so actively in the past. He should have been making sure black people in those communities were registered to vote and making sure there were people there to help get them registered. It’s the black vote that could be the difference between Jones and Moore in a Senate seat. If white women are Moore’s savior, then it’s black women who can save Jones.