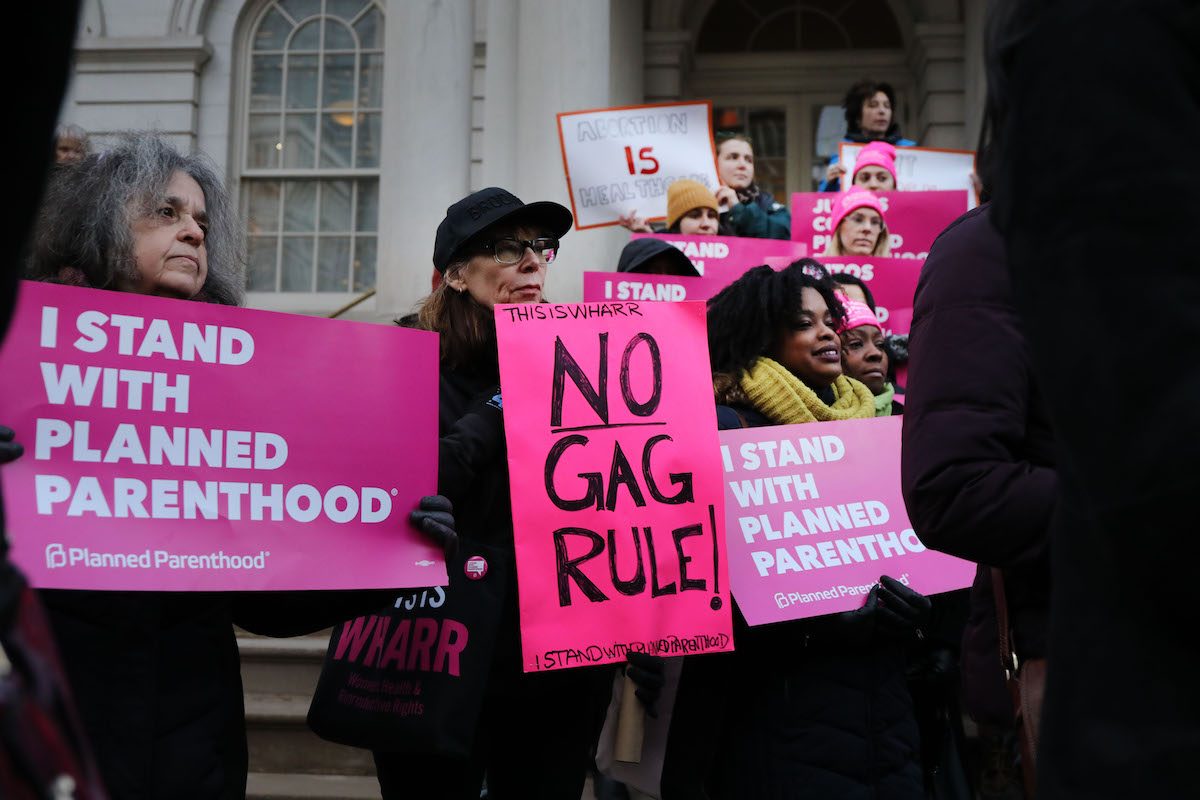 Last week, the U.S. Ninth Circuit Court of Appeals ruled that the Trump administration’s domestic “gag rule” could take effect, and within days, the Health and Human Services Department announced its intent to implement and enforce the policy. This tends to be the sort of news that gets buried in a news cycle that’s seen a sitting U.S. president tell four congresswomen of color to “go back where they came from,” but it’s important nonetheless. Thousands of low-income, disproportionately women of color could lose access to key reproductive healthcare because of this policy, with an estimated 40 percent of all women on Medicaid reliant on Planned Parenthood for preventive care.

Despite ongoing lawsuits filed in response to the Ninth Circuit’s decision, there is currently no legal obstacle to prevent the Trump administration from enforcing this policy, and this week, reproductive health providers across the country were formally put on notice. Unfortunately, none of this should come as a surprise. Throughout the 2016 presidential campaign, then-candidate Donald Trump (and just about all Republican candidates) vowed to defund Planned Parenthood, which has been one of the most salient conservative talking points for years.

And that’s probably because it works: The majority of their base froths at the mouth at the thought of women forced to be pregnant and give birth—generally women who are unable to afford the most basic healthcare they need to prevent pregnancy in the first place. What’s frustrating about the gag rule and the minimal coverage it has received is, like the ongoing wave of state-level abortion bans, the appointment of anti-abortion Supreme Court justices, and all the other horrors that were promised by this administration from day one, women and activists warned of what was at stake, only to be ignored but ultimately proven right.

Sure, there was some meaningful coverage, conversation, and collective national consciousness of the War on Women in the wake of abortion bans in Georgia, Alabama, Louisiana and Missouri in May and June. But where has all of that gone, since? Where has that energy and passion and awareness gone, now that, effective immediately, reproductive healthcare providers across the country could lose key funding, leaving the most vulnerable members of society without access to key healthcare?

So many challenges to reproductive rights and justice arise constantly, all but on a daily basis; it’s understandable that not everyone, everywhere is going to know every single thing going on, but this—the defunding of women’s health providers—is huge. If we, as a nation, lack the collective attention span to be aware of and care about this, that’s a problem.

In case you’ve missed it in the news cycle in the last several months, the gag rule refers to a policy that would strip Title X funding from all organizations and healthcare providers that offer abortion care or abortion referral services. Yet, in a dangerous twist of irony, these organizations often rely on Title X funds to offer access to the very birth control resources that prevent the need for abortion care in the first place, in the only effective way: by preventing unwanted pregnancy. These resources include contraception, sexual health education, breast and cervical cancer screenings, STD testing, and more. According to some estimates, Title X funding helps prevent 1 million unwanted pregnancies annually.

The implementation of the domestic gag rule is nothing short of a national emergency, but the very lack of urgency around it speaks to a greater problem of issues regarded as “women’s issues” being erased from public consciousness.

“Women’s healthcare” is understood as less important and lesser, in general, than healthcare itself. Liberal men will point out that birth control isn’t that expensive, despite how the most reliable forms can cost more than $1,200, and the $10 to $50 monthly cost of birth control pills can make all the difference for women in poverty. Liberal men may also argue that it’s okay to prevent taxpayer funding from going to organizations that offer abortions since some taxpayers may oppose abortion, and there’s so much wrong with that logic that it’s hard to even know where to begin. (For example, abortion is life-saving healthcare, and access to it shouldn’t hinge on socioeconomic status or public opinion; everyone in civilized society sees their taxes pay for things they may not like—be that wars where actual, living people and children die, or anti-abortion “crisis pregnancy centers.”)

But none of that is the point. The point is that, with hundreds of state and federal anti-abortion laws passing in the last few years alone, and maternal and infant death rates soaring, often disproportionately in states with more restrictions on abortion, the state of women’s health in the U.S. has never been more precarious in recent history. It’s time to start paying attention—and taking action.