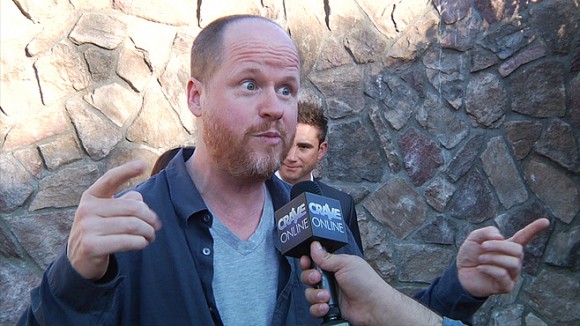 Joss Whedon‘s unique movies essentially won the 2013 Saturn Awards last week, but he also had a few things to say on the red carpet that were of interest.  Whedon talked with Crave Online Interviewer William Bibbiani about The Avengers Saturn Award nominations, how it feels to have such a successful superhero movie under his belt, and how he views the X-Men: Days of Future Past Quicksilver versus his own Quicksilver and Scarlet Witch for The Avengers 2. In doing so, Whedon revealed that the two Avengers newcomers will be “a huge part” of the next film.

When asked about the fact that Brian Singer and company had their own Quicksilver in the upcoming X Men movie, Whedon gave a very diplomatic answer, responding that, for The Avengers,

“It’s a huge part of the movie. I’m really excited about it, and i don’t know what they [Brian Singer with X Men] are doing and i’m determinedly not knowing.  They do their thing, I have to do mine”

From what we know so far, Whedon’s Quicksilver and Scarlet Witch are characters near and dear to his heart, having populated the Avengers comics that he read as a child.  Now we know they are not only new characters, but an integral part of the film, which makes sense given the amount Whedon emphasized character dynamics in the first film. New characters would certainly introduce new relationships to explore, and perhaps could introduce some conflict that will be missing now that Loki is out of the picture.

Whedon also had some entertaining words for the people behind his failed attempt to take Wonder Woman to the big screen. Given how successful The Avengers was, and how solid the Joss Whedon and Superhero film combination seems to be, the failure of the Wonder Woman film is quite the missed opportunity for Hollywood, and Whedon seems to agree.

“There’s a period of anger where you’re like, ‘hey you remember all those times where I told you it would have worked?! They [Marvel] believed me and it did.’…You do sort of want to have a slap line of everyone you’ve worked for, but, you know, I’ve been luckier than most people so, you get over that”

Finally, when asked about any upcoming original projects, the interview gives us slightly less to hope for.  With Whedon tied up in Marvel movies for several years, not to mention the S.H.I.E.L.D. television show premiering this fall, we’ve already been given the new over and over, that Joss Whedon will not in fact be working on anything original for quite some time.

“I’m trying to…not get obsessed with, ‘Oh, you know what else would be fun?’ But I can make no promises.”

This makes a Doctor Horrible 2 look less likely, if nothing else, but still, we have enough interesting Marvel news, including Scarlet Witch and Quicksilver’s importance, to hold us over.  After all, Whedon can only do so much, and he has already managed to squeeze filming into his breaks. Check out the full interview below.